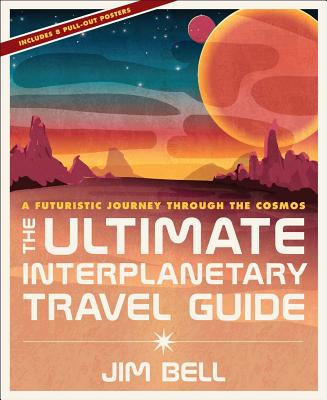 A Futuristic Journey Through the Cosmos

"Like any good travel book, Jim Bell's guide gives you some good advice on what to bring and what to wear. Of course, we don't leave for a few hundred years. For now though, check out these images--the pictures alone will make you want to start packing " --Bill Nye, CEO, The Planetary Society Do you dream of traveling to other worlds? This visually spectacular book brings you closer to an interplanetary voyage than ever before Following in the footsteps of Jim Bell's successful The Space Book, Mars 3-D, and Moon 3-D, this large-format volume offers space enthusiasts an unparalleled visual experience of our solar system. Featuring eight removable NASA posters highlighting the wonders of space, gorgeous full-color photography, and stunning art, Bell's travel guide takes you on a futuristic tour of the solar system and beyond. Along the way, you'll experience what it's like to hike across lunar craters, soar through the winds of Venus, and raft down the rapids of Titan. Informative summaries of every destination are based on knowledge gleaned from more than 50 years of space exploration. The images provide a taste of the awe-inspiring destinations that we may one day reach, from the oceans of Europa to the newly discovered planets of TRAPPIST-1, while captions draw our attention to the unusual craters, ridges, seas, and storms captured by orbiting satellites, landers, and rovers.

Dr. Jim Bell is a professor in Arizona State University's School of Earth and Space Exploration in Tempe, Arizona, and an adjunct professor in the Department of Astronomy at Cornell University in Ithaca, New York. As president of The Planetary Society, he is an active and prolific public commentator on science and space exploration, earning the 2011 Carl Sagan Medal from the American Astronomical Society. Jim has appeared on numerous radio and television shows, including NBC's Today Show and PBS's NewsHour, as well as programs on the Discovery, National Geographic, and History networks. Author of four illustrated trade books, he has been involved in such NASA robotic exploration missions as the Near Earth Asteroid Rendezvous (NEAR), Mars Pathfinder, the Mars rovers Spirit, Opportunity, and Curiosity, and the Lunar Reconnaissance Orbiter. The main belt asteroid 8146 Jimbell is named in his honor.
Loading...
or support indie stores by buying on