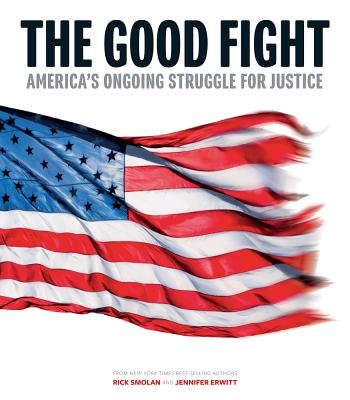 "A powerful collection of personal journeys through words, images, music, and videos that shows how much progress still lies ahead in the quest for dignity and equality." --Walter Isaacson, author of Benjamin Franklin: An American Life and Steve Jobs From the creator of the bestselling Day in the Life series comes an extraordinary illustrated book showing how much progress has been made in America over the last 100 years against hatred, bigotry, racism, and injustice--and how much more work remains to be done. The Good Fight vividly depicts the human face of America's sporadically violent, often triumphant, always risky struggle to fulfill the promise of freedom and equality for all. Fought in the streets, the courthouse, and the corridors of Congress, it is a story that has become America's own morality play, illustrated here through more than 180 memorable photographs, nearly 60 embedded videos, over a dozen compelling essays plus examples of music and lyrics that rallied America's resistance to injustice. For those who wish to eradicate bigotry and intolerance in America, The Good Fight is a call to action. It shows us how much we as a nation have accomplished; it also reminds us of the fragility of our success and how quickly this hard-fought progress can slip away if we do not remain vigilant. In addition, The Good Fight features a smartphone app (THE GOOD FIGHT VIEWER) that enables readers to point their smartphones or tablets at over 60 photos to immediately stream online video clips, including TED Talks, that vividly bring each story to life. This timely book captures the struggles--and the successes--experienced by women, African Americans, Native Americans, Jews, Muslims, the LGBTQ community, Latinos, Asian Americans, and the disabled. Along with the eloquent images and graphics, The Good Fight includes short guest essays from individuals representing each group. The writers include:

Rick Smolan, a former Time, Life, and National Geographic photographer, is best known as the creator of the Day in the Life book series. As the cofounders of Against All Odds Productions, he and his partner, Jennifer Erwitt, orchestrate global photography projects that combine creative storytelling with state-of-the-art technology. Many of their books have appeared on TheNew York Times bestseller lists and have been featured on the covers of Time, Newsweek, Fortune, and similar publications around the world. Their projects include Inside Tracks, The Human Face of Big Data, America at Home, Blue Planet Run, The Obama Time Capsule, America 24/7, One Digital Day, 24 Hours in Cyberspace, Passage to Vietnam, The Power to Heal, and From Alice to Ocean. Fortune featured Against All Odds as "One of the 25 Coolest Companies in America."
Loading...
or
Not Currently Available for Direct Purchase