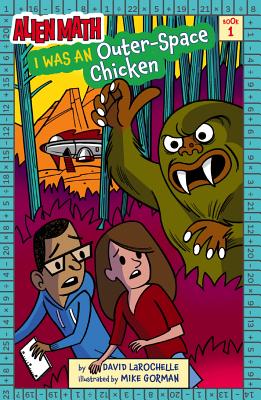 I Was an Outer-Space Chicken (Alien Math Book 1), 1

Math meets sci-fi in this clever chapter book about two numbers-loving friends and their alien adventures. The first in a new series "This playful math series is overall a valuable addition to the chapter-book shelf." --Kirkus "LaRochelle shrewdly integrates the numerical puzzles . . . into his madcap plot, and the playful competition between the math whiz kids further energizes the story." --Publishers Weekly Best friends Lamar and Lexie love math--and, in this first book in the Alien Math series, their skills come in handy when they're abducted by an extraterrestrial named Fooz. Fooz, unfamiliar with Earth life, mistakes the children for chickens . . . until Lamar and Lexie prove they're human by solving a tricky math problem. Fooz agrees to take them home, but on a side trip to a nearby planet to refuel, the two are captured by lumfurs, creatures that resemble Bigfoot. In order to escape and return to Fooz's ship and subsequently Earth, Lamar and Lexie must solve problems that require finding patterns, making estimates, and deciphering codes. Can the children pass the test and get home again?

A former elementary math teacher, David LaRochelle has won numerous awards for his children's books, including the Sid Fleischman Humor Award, the SCBWI Golden Kite Honor Award, and the Minnesota Book Award. His previous books for Sterling were This Is NOT a Cat, 1+1=5 and Other Unlikely Additions, and Arlo's ARTrageous Adventure, which he both wrote and illustrated. He lives in White Bear Lake, MN. Find out more about David at davidlarochelle.com. Mike Gorman is an illustrator, graphic designer, web developer, and tattoo artist. He lives in Westbrook, ME.
Loading...
or support indie stores by buying on