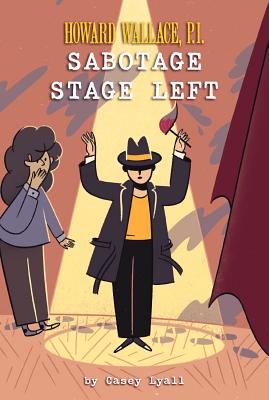 Howard and Ivy return for a third adventure This time, the drama's backstage when someone sets out to sabotage the school play . . . and frame Howard. "I wasn't taking the fall for this. You couldn't force a guy into a job and then blame him when it all went sideways." Spring (musical) fever has hit the Grantleyville Middle School Drama Club Since Ivy Mason is busy with the production, she decides to take a break from sleuthing, while Howard Wallace keeps things running smoothly with their detective agency. Then, just a few weeks before showtime, suspicious things start happening backstage: missing costumes, damaged props, and too many other mishaps to be coincidental. Ivy calls in Howard and their crew to take on the case. Howard tries to lay low and quietly sniff out the perp, but he's soon brought into the spotlight when he's framed as the saboteur Can the team of intrepid P.I.s clear Howard's name and catch the culprit before the curtain falls on the big show?

Casey Lyall (5'4", brown hair, blue eyes, no known aliases) is a middle-grade writer from Southwestern Ontario. She works at her local library where she runs a number of writing groups for kids and is the author of the Howard Wallace, P.I. series, as well as the picture book Inky's Great Escape. Find her on Twitter as @CKLyall and at caseylyall.com.
Loading...
or
Not Currently Available for Direct Purchase