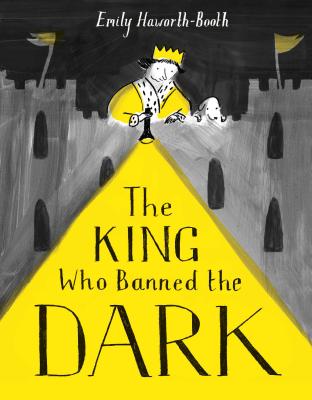 The King Who Banned the Dark

There once was a Prince who was afraid of the dark--and when he became King he decided to do something about it. Written by an award-winning author, this is a magical modern fairy tale about conquering your fears . . . and creating change. "A satirical debut that is simultaneously funny and sobering." --Publishers Weekly Most children are scared of the dark at some time or other. The hero of this story actually gets to do something about it He's a Prince--and when he becomes King he decides to ban the dark completely. At first, everyone celebrates. But before long, no one can sleep and the exhausted citizens are ready to revolt. Can the people help the King face his fears, turn off the lights, and see that you can't appreciate the light without having the dark, too?

Emily Haworth-Booth is an author/illustrator and educator, teaching courses on comics, graphic novels, and illustration at the Royal Drawing School in London, and running workshops for adults and children at other locations nationwide. In 2013 she won the Jonathan Cape/Observer/Comica Graphic Short Story Prize for her story "Colonic" and was runner-up for the same prize in 2008. Her comics have appeared in print in the Observer and Vogue.
Loading...
or
Not Currently Available for Direct Purchase