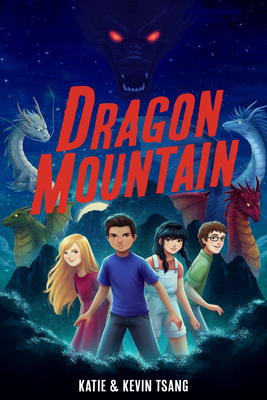 From the authors behind the critically acclaimed Sam Wu books, a thrilling new fantasy series about friendship, courage, adventure, and dragon magic. When 12-year-old Billy Chan finds out his parents are sending him to a language and culture camp in the middle-of-nowhere China, he can't imagine anything worse. He's not expecting to become friends with fellow campers Dylan O'Donnell, Charlotte Bell, and Liu Ling-Fei. And he's definitely not planning to meet any dragons. But when the four kids accidentally open a crack in an ancient mountain, they become involved in an ages-old struggle of good versus evil. Now it's up to them to save the Dragon Realm--if they don't, the world as they know it might disappear forever.

Katie and Kevin Tsang met while studying at the Chinese University of Hong Kong. Kevin works as a healthcare technology consultant, and Katie writes YA as Katherine Webber. Together, they have also co-authored the Sam Wu Is Not Afraid chapter book series. They currently live in London and can be found on Twitter @kwebberwrites and @kevtsang.
Loading...
or support indie stores by buying on