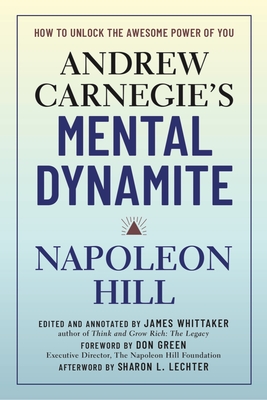 How to Unlock the Awesome Power of You

Based on a series of booklets written by bestselling motivational writer Napoleon Hill, Andrew Carnegie's Mental Dynamite outlines the importance of three essential principles of success: self-discipline, learning from defeat, and the Golden Rule applied. In 1908, Napoleon Hill met industrialist Andrew Carnegie for what he believed would be a short interview for an article. Instead, Carnegie spent hours detailing his principles of success to the young magazine reporter. He then challenged Hill to devote 20 years to collating a proven formula that would propel people of all backgrounds to happiness, harmony, and prosperity. Hill accepted the challenge, which he distilled in the perennial bestseller Think and Grow Rich. Now, more than a century later, the Napoleon Hill Foundation is releasing this epic conversation to remind people that there are simple solutions to the problems troubling us most, everything from relationships and education to homelessness and even democracy. This is revealed in three major principles: self-discipline, which shows how the six departments of the mind may be organized and directed to any end; learning from defeat, which describes how defeat can be made to yield "the seed of an equivalent benefit" and how to turn it into a stepping-stone to greater achievement; and the Golden Rule applied for developing rewarding relationships, peace of mind, and a strengthened consciousness. Each chapter draws on Carnegie's words and advice as inspiration, with annotations by Napoleon Hill scholar James Whittaker explaining why they are essential for reaching your goals and prospering--for you, your family, and your community.

Napoleon Hill was an American author and entrepreneur best known for Think and Grow Rich, published in 1937, which has become one of the bestselling books of all time. His teachings have gone on to influence entire generations of success seekers, setting the standard for the foundations of today's motivational thinking. James Whittaker is the bestselling author of Think and Grow Rich: The Legacy, the official companion to the multimillion-dollar film based on Napoleon Hill's timeless classic. James is also a co-executive producer of that film. His first book, The Beginner's Guide to Wealth, was named book of the month by Money Magazine. He has been interviewed extensively for television, print, and digital media around the world, including The Today Show, Success Magazine, and The Sydney Morning Herald. James lives in LA.
or support indie stores by buying on