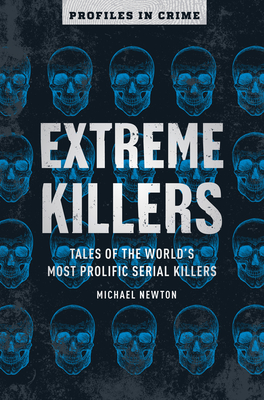 Tales of the World's Most Prolific Serial Killers

For fans of true crime, this fourth entry in the Profiles in Crime series presents history's most "elite" serial killers--master murderers who stretched the psychic envelope and racked up the largest number of victims. Historical in scope and international in breadth, this collection of true-crime stories chronicles 15 of the most infamous "extreme killers" who ever lived--those with the largest number of confirmed kills, in many cases more than 50. The subjects range from 15th-century French child killer Gilles de Rais, purportedly the model for the folk legend of "Bluebeard," to Henry Lee Lucas and Otis Toole, who inspired the film Henry: Portrait of a Serial Killer; to Samuel Little, America's most prolific serial killer with 60 confirmed and 93 claimed murdered, to Mikhail Popkov, dubbed "The Werewolf" by Russian media for having slain more than 70 women between 1992 and 2010.

Michael Newton is the author of the Encyclopedia of Serial Killers. His more than 348 works of fiction and nonfiction include the true-crime books The Encyclopedia of Unsolved Crimes;The Mafia at Appalachin, 1957;The Encyclopedia of Robberies, Heists, and Capers;The Gangsters Encyclopedia: The World's Most Notorious Mobs, Gangs and Villains; and The FBI Encyclopedia.
Loading...
or support indie stores by buying on
(This book is on backorder)