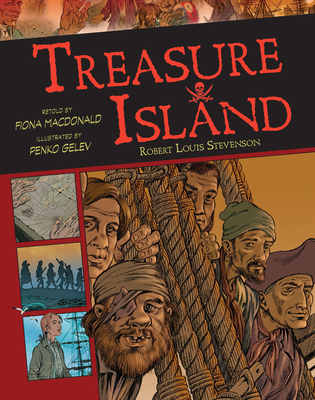 Enjoy Robert Louis Stevenson's classic novel in a colorful graphic edition. Abridged for fast-paced reading, this book features illustrations that vividly tell the tale. With everything from pirates and buried treasure to a deserted tropical island and a mutinous crew, Treasure Island has captivated generations of readers with its action, adventure, and danger. Robert Louis Stevenson's thrilling story now comes alive in this graphic-novel edition.

Robert Louis Stevenson was born in Edinburgh in 1850. The son of a prosperous civil engineer, he was expected to follow the family profession but was finally allowed to study law at Edinburgh University. Stevenson reacted forcibly against the Presbyterianism of both his city's professional classes and his devout parents, but the influence of Calvinism on his childhood informed the fascination with evil that is so powerfully explored in Dr Jekyll and Mr Hyde. Stevenson suffered from a severe respiratory disease from his twenties onwards, leading him to settle in the gentle climate of Samoa with his American wife, Fanny Osbourne.
Loading...
or
Not Currently Available for Direct Purchase