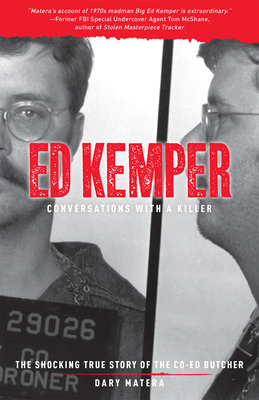 Conversations with a Killer: The Shocking True Story of the Co-Ed Butcher

The third title in our Conversations with a Killer series focuses on one of the most notorious serial killers of the 1970s, Ed Kemper, a key character in the hit Netflix series Mindhunter. If there ever was a human monster that walked this earth, it was the highly intelligent, psychotic, 6'9" killer Edward "Big Ed" Kemper. As a troubled 15-year-old, Kemper shot and killed his grandparents. Eight years later, he went on an 11-month reign of terror slaughtering and dismembering six college co-eds in California, brutally killing his mother with a hammer, and breaking her best friend's neck. Kemper, 71, remains alive at the California Medical Facility in Vacaville, more intimidating now than ever. Masterful crime writer Dary Matera tells Kemper's full, shocking story, interweaving insights from the killer himself.

Dary Matera is the author of 14 books, including the bestseller Are You Lonesome Tonight and Sterling's Charles Manson: Conversations with a Killer, co-authored with Edward George. He's worked closely with the FBI on such previous books as Quitting the Mob, The FBI's Ten Most Wanted, and John Dillinger. His books have been featured on 20/20, 60 Minutes, 48 Hours, Primetime Live, Nightline, Good Morning America, Inside Edition, and CBS This Morning, among others. They have been reviewed and featured in The New York Times, The Wall Street Journal, Los Angeles Times, Washington Post, Newsweek, Time, People, Life, and many additional publications. Matera has appeared in more than a dozen TV documentaries featuring his book subjects, and on the TV series America: Fact or Fiction and William Shatner's The UnXplained.
Loading...
or support indie stores by buying on