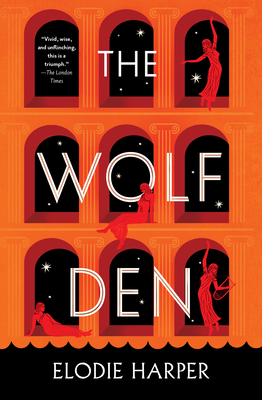 Sold by her impoverished mother. Enslaved in an infamous brothel in Pompeii. Determined to fight for her freedom at all costs. . . . Enter into the Wolf Den. Amara was once the beloved daughter of a doctor in Greece, until her father's sudden death plunged her mother into destitution. Now Amara is a slave and prostitute in Pompeii's notorious Wolf Den brothel or lupanar, owned by a cruel and ruthless man. Intelligent and resourceful, she is forced to hide her true self. But her spirit is far from broken. Buoyed by the sisterhood she forges with the brothel's other women, Amarafindssolace in the laughterand hopes they all share. For the streets of the city are alive with opportunity--here, even the lowest-born slave can dream of a new beginning. But everything in Pompeii has a price. How much will Amara's freedom cost her? The Wolf Den is the first in a trilogy of novels about the lives of women in ancient Pompeii.

Elodie Harper is a journalist and prize-winning writer. She is currently a reporter and presenter at ITV News, and before that worked as a producer for Channel 4 News. Elodie studied Latin poetry both in the original and in translation as part of her English Literature degree at Oxford, instilling a lifelong interest in the ancient world. The Wolf Den is the first in a trilogy of novels about the lives of women in ancient Pompeii. It was a number one Sunday Times bestseller. Elodie lives in the UK.
Loading...
or support indie stores by buying on