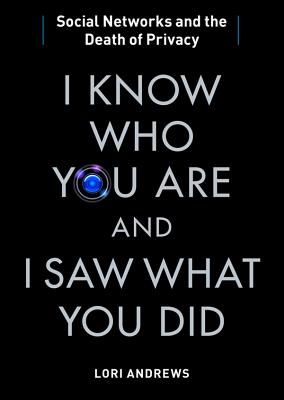 Social networks are the defining cultural movement of our time, empowering us in constantly evolving ways. We can all now be reporters, alerting the world to breaking news of a natural disaster; participate in crowd-sourced scientific research; and become investigators, helping the police solve crimes. Social networks have even helped to bring down governments. But they have also greatly accelerated the erosion of our personal privacy rights, and any one of us could become the victim of shocking violations at any time. If Facebook were a country, it would be the third largest nation in the world. While that nation appears to be a comforting small town in which we socialize with our selective group of friends, it and the rest of the Web are actually lawless frontiers of hidden and unpredictable dangers. The same power of information that can topple governments can destroy a person's career or marriage. As leading expert on social networks and privacy Lori Andrews shows through groundbreaking research and a host of stunning stories of abuses, as we work and chat and shop and date over the Web, we are opening ourselves up to increasingly intrusive, relentless, and anonymous surveillance by employers, schools, lawyers, the police, and aggressive data aggregator services that compile an astonishing amount of information about us and sell it to any and all takers. She reveals the myriad, ever more sophisticated techniques being used to track us and discloses how routinely colleges and employers reject applicants due to personal information searches; robbers use postings about vacations to target homes for break-ins; lawyers readily find information to use against us in divorce and child custody cases; and at one school, the administrators actually used the cameras on students' school-provided laptops to spy on them in their homes. Some mobile Web devices are even being programmed to listen in on us and feed data services a steady stream of information about where we are and what we are doing. Even if we use the best services to get our personal data removed from the Web, in a short time almost all that data is restored. As Andrews persuasively argues, the legal system cannot be counted on to protect us. In the thousands of cases brought to trial by those whose rights have been violated, judges have most often ruled against them. That is why, in addition to revealing the dangers and providing the best expert advice about protecting ourselves, Andrews proposes that we all become supporters of a constitution for the Web, which she has drafted and introduces in this book. Now is the time to join her and take action--the very future of privacy is at stake.
or
Not Currently Available for Direct Purchase
Copyright © 2020 American Booksellers Association