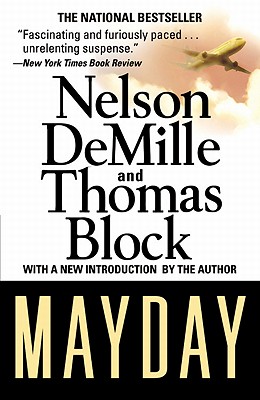 Twelve miles above the Pacific Ocean, a missile strikes a jumbo passenger jet. The flight crew is crippled or dead. Now, defying both nature and man, three survivors must achieve the impossible. Land the plane. From master storyteller Nelson DeMille and master pilot Thomas Block comes Maydaythe classic bestseller that packs a supersonic shock at every turn of the page . . . the most terrifyingly realistic air disaster thriller ever. Like a growing tidal wave, the escaping air was gathering momentum.
A teenaged girl in aisle 18, seat D, near the port-side aisle, her seat dislocated by the original impact, suddenly found herself gripping her seat track on the floor, her overturned seat still strapped to her body. The seatbelt failed and the seat shot down the aisle. She lost her grip and was dragged after it. Her eyes were filled with horror as she dug her nails into the carpet, as the racing air pulled her toward the yawning hole that led outside. Her cries were unheard by even those passengers who sat barely inches away from her struggle. The noise of the escaping air was so loud that it was no longer decipherable as sound, but seemed instead a solid thing pounding at the people in their seats . . .