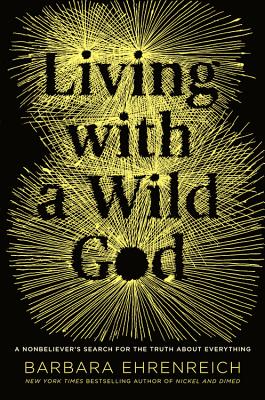 Living with a Wild God

Barbara Ehrenreich is one of the most important thinkers of our time. Educated as a scientist, she is an author, journalist, activist, and advocate for social justice. In Living With a Wild God, she recounts her quest-beginning in childhood-to find ""the Truth"" about the universe and everything else: What's really going on? Why are we here? In middle age, she rediscovered the journal she had kept during her tumultuous adolescence, which records an event so strange, so cataclysmic, that she had never, in all the intervening years, written or spoken about it to anyone. It was the kind of event that people call a ""mystical experience""-and, to a steadfast atheist and rationalist, nothing less than shattering.

In Living With a Wild God, Ehrenreich reconstructs her childhood mission, bringing an older woman's wry and erudite perspective to a young girl's impassioned obsession with the questions that, at one point or another, torment us all. The result is both deeply personal and cosmically sweeping-a searing memoir and a profound reflection on science, religion, and the human condition. With her signature combination of intellectual rigor and uninhibited imagination, Ehrenreich offers a true literary achievement-a work that has the power not only to entertain but amaze.

Praise For Living with a Wild God: A Nonbeliever's Search for the Truth about Everything…

"[Ehrenreich] resolutely avoids rhetoric in that 'blubbery vein'--which is why her book is such a rare feat...She struggles to make sense of the epiphany without recourse to the 'verbal hand-wavings about mystery and transcendence' that go with the territory... Ehrenreich has no interest in conversion...She wants, and inspires, open minds."—The Atlantic

"The questions in the world may be infinite, but perhaps the answers are few. And however we define that mystery, there's no escaping our essential obligation to it, for it may, as Ehrenreich writes, 'be seeking us out.'"—New York Times Book Review

"Ehrenreich has always been an intellectual and a journalistic badass... [She] ultimately arrives at a truce with the idea of God. You'll admire her journey."
—Entertainment Weekly

"As personal a piece of writing as she has ever done... A surprising turn for Ehrenreich, who for more than 40 years has been one of our most accomplished and outspoken advocacy journalists and activists."—The Los Angeles Times

"Until reading LIVING WITH A WILD GOD I counted the Mary Karr memoir trilogy as my favorite from a contemporary literary figure. Now, Ehrenreich's memoir is tied for first place with Karr's books... Thank goodness [this book] exists. It is quite likely to rock the minds of readers who dare open to the first page."—Houston Chronicle

"A smart and enjoyable read... Ehrenreich maintains a grip on a sensible skepticism about religious matters - and a positive hostility toward the idea of unthinking faith - while avoiding the narrow-minded excesses that more zealous atheists sometimes fall victim to."—The Chicago Tribune

Barbara Ehrenreich is the author of over a dozen books, including the New York Times bestseller Nickel and Dimed. Winner of the 2018 Erasmus Prize for her work as an investigative journalist, she has a PhD in cellular immunology from Rockefeller University and writes frequently about health care and medical science, among many other subjects. She lives in Virginia.