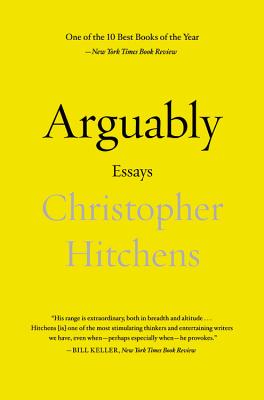 "Anyone who occasionally opens one of our more serious periodicals has learned that the byline of Christopher Hitchens is an opportunity to be delighted or maddened-possibly both-but in any case not to be missed....His range is extraordinary, both in breadth and altitude. He is as self-confident on the politics of Lebanon as on the ontology of the Harry Potter books....I still find Hitchens one of the most stimulating thinkers and entertaining we have, even when-perhaps especially when-he provokes."
—Bill Keller, New York Times Book Review

"The essays in 'Arguably' remind us of other dimensions to this singular writer and thinker that are sometimes overshadowed by the range of his political commentary. Though there are plenty of essays on politics to be found here, the book also treats us to other arrows in Hitchens' proverbial quiver, including his bracing, exhilarating approach to important literary figures...Its value is clear and needs no justification. And since his diagnosis of esophageal cancer last year, opportunities to hear him, understandably, have been fewer. Which is another thing 'Arguably' inadvertently addresses - for in reading this collection of his thoughts, immersing yourself in the particular turns of phrase and associations of Hitchens' wit, you suddenly realize something else: You're hearing his voice again."
—Nick Owchar, Los Angeles Times

"One reads him [Hitchens] despite his reputation as someone who wants to drink, argue, and tear the ornaments off the tree, because he is, first and last, a writer, an always exciting, often exacting, furious polemicist. This fact, the most salient thing about him, often gets neglected in the public jousting. Arguably, Hitchens's new collection, forcefully proves this point. Consisting of three kinds of writing - literary journalism, political commentary, and cultural complaint - Arguably offers a panoramic if somewhat jaundiced view of the last decade or so of cultural and political history."—The Boston Globe

"Opinions are to Christopher Hitchens what oil is to Saudi Arabia. This collection, featuring his liveliest, funniest and most infamous essays....There is a time for the balanced, even-handed and sober approach - but why bother with any of that when you could be reading someone as provocative and impish as Hitchens?"
—The New York Post