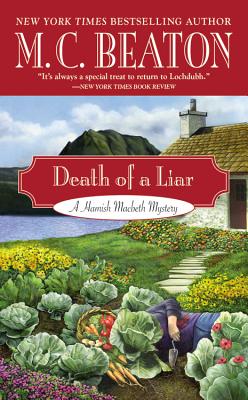 Death of a Liar (A Hamish Macbeth Mystery #30) (Mass Market)

Death of a Liar: A Hamish Macbeth Mystery

Sergeant Hamish Macbeth is alarmed to receive a report from a woman in the small village of Cronish in the Scottish Highlands. She has been brutally attacked and the criminal is on the loose. But upon further investigation, Hamish discovers that she was lying about the crime. So when the same woman calls him back about an intruder, he simply marvels at her compulsion to lie. This time, though, she is telling the truth. Her body is found in her home and Hamish must sort through all of her lies to solve the crime.

Praise For Death of a Liar (A Hamish Macbeth Mystery #30)…

Praise for Death of a Valentine:
"A fun new read."—Woman's World

Praise for Death of a Witch:
"Full of the author's trademark zest and wit...Beaton fans will be delighted."—Publishers Weekly

"A sound mystery featuring a generous portion of Hamish's complicated relationships and the usual delightful Highland descriptions."—Kirkus
or support indie stores by buying on
(This book is on backorder)
Copyright © 2020 American Booksellers Association