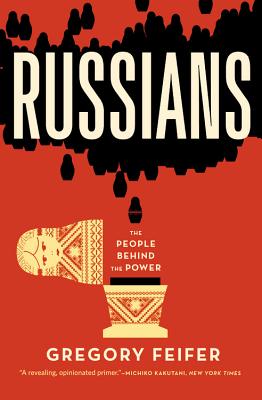 The People Behind the Power

From former NPR Moscow correspondent Gregory Feifer comes an incisive portrait that draws on vivid personal stories to portray the forces that have shaped the Russian character for centuries-and continue to do so today.

Russians explores the seeming paradoxes of life in Russia by unraveling the nature of its people: what is it in their history, their desires, and their conception of themselves that makes them baffling to the West? Using the insights of his decade as a journalist in Russia, Feifer corrects pervasive misconceptions by showing that much of what appears inexplicable about the country is logical when seen from the inside. He gets to the heart of why the world's leading energy producer continues to exasperate many in the international community. And he makes clear why President Vladimir Putin remains popular even as the gap widens between the super-rich and the great majority of poor.

Traversing the world's largest country from the violent North Caucasus to Arctic Siberia, Feifer conducted hundreds of intimate conversations about everything from sex and vodka to Russia's complex relationship with the world. From fabulously wealthy oligarchs to the destitute elderly babushki who beg in Moscow's streets, he tells the story of a society bursting with vitality under a leadership rooted in tradition and often on the edge of collapse despite its authoritarian power.

Feifer also draws on formative experiences in Russia's past and illustrative workings of its culture to shed much-needed light on the purposely hidden functioning of its society before, during, and after communism. Woven throughout is an intimate, first-person account of his family history, from his Russian mother's coming of age among Moscow's bohemian artistic elite to his American father's harrowing vodka-fueled run-ins with the KGB.

What emerges is a rare portrait of a unique land of extremes whose forbidding geography, merciless climate, and crushing corruption has nevertheless produced some of the world's greatest art and some of its most remarkable scientific advances. Russians is an expertly observed, gripping profile of a people who will continue challenging the West for the foreseeable future.

Gregory Feifer is a senior correspondent for Radio Free Europe who also writes for Foreign Affairs and the New Republic. Until recently, he was National Public Radio's Moscow correspondent, and has reported from Russia for almost a decade. During its resurgence under Putin, he filed from other former Soviet republics and across Russia, where he observed the effects of the country's vast new oil wealth on an increasingly nationalistic society as well as Moscow's rekindling of a new Cold War-style opposition to the West. In 2008, Feifer covered the Russia-Georgia war from the breakaway Georgian region of South Ossetia and traveled to Siberia, Belgrade and Berlin to produce a series on the Kremlin's use of Gazprom, the Russian gas monopoly, as an instrument of foreign policy.

Before joining NPR in 2005, Feifer -- whose mother is Russian -- lived in Paris and New York, and wrote for outlets including Agence France Presse and World Policy Journal. He witnessed the coup d'état attempt against Mikhail Gorbachev in 1991, and later, on a fellowship from the Institute of Current World Affairs, examined the end of the Yeltsin era and Russia's subsequent transformation into an authoritarian state.

Feifer is the author of The Great Gamble, a history of the Soviet war in Afghanistan and coauthor of Spy Handler with former KGB colonel Victor Cherkashin.
Loading...
or
Not Currently Available for Direct Purchase