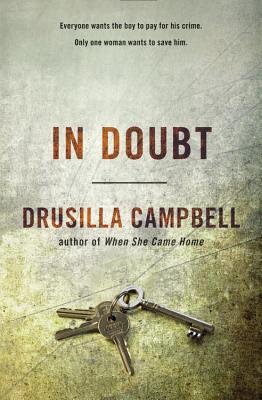 Defense Attorney Sophie Giraudo is about to open a new legal practice in her hometown of San Sebastian, California, when the beloved governer is shot and seriously wounded during a celebration in the town park. The only thing more shocking than the crime itself is the identity of the would-be assassin: a seemingly gentle teenager named Donny. Driven by her desire to understand what could make a person with no history of violence suddenly commit such a terrible act, Sophie reluctantly agrees to take him on as a client, knowing that, at least, it will bring her some income. But soon she realizes that she also has personal motivations for taking the case: a desire to prove to her overbearing mother that she is not the reckless and self-destructive tennager she used to be, to prove to her ex-husband, who happens to be the prosecuting attorney, that she can win her case, and to prove to herself that the traumatic events of her adolescence no longer define her.

As she digs deeper into Donny's past, Sophie begins to suspect that he might not be the cold-blooded killer everyone thinks he is. Does Donny's narcissistic mother really have her son's best interest in mind? Is Donny's mentor who runs Boys Into Men, a program for disadvantaged youths, the altruistic man he claims to be? Is Donny a deranged murderer, or a victim of his circumstances acting out of desperation? As Sophie races to uncover the truth, she is forced to come to terms with her past and to fight for what she knows is right...even if it means risking her reputation and possibly her life.

Praise For In Doubt…

"Campbell draws the reader into an ugly world in her excellent take on the many lines between right and wrong."—RT Book Reviews on IN DOUBT

"Like Barbara Delinsky, Campbell entertains as well as informs as she wraps a novel around a timely social issue. While many authors have tackled post-traumatic stress disorder in recent years, Campbell puts her own spin on it by telling a PTSD story from the point of view of a female Iraq War veteran...Plenty of contemporary food for thought."—Booklist on When She Came Home

"A heart-wrenching novel that deals with a number of important social issues, including the actions of private contractors in war, the treatment of women in the armed services, domestic violence and school bullying."—Kirkus on When She Came Home

On WILDWOOD:
"Resist the urge to turn the page to find out what happens next. Linger, instead, to savor the skillfully crafted writing." --Judy Reeves, author of Writing Alone, Writing Together

"The pull of family and career, the limits of friendship and the demands of love all come to vivid life in Wildwood." --Susan Vreeland, author of Girl in Hyacinth Blue

On THE GOOD SISTER:
"The story will make you ache for these two women who are bound inextricably and irrevocably by their shared past." --bestselling author T. Greenwood

"With unflinching honesty, Drusilla Campbell explores the emotional complexities between sisters and mothers, and just how far we will go to hurt and help each other. Poignant and intense." --Ellen Newmark, author of The Book of Unholy Mischief

"Campbell burns through Simone's struggles and those of Roxanne in haunting, graphic detail. Should be on everyone's book club list." --Publisher's Weekly

Drusilla Campbell is the author of three critically acclaimed novels: Wildwood, The Edge of Sky, and Blood Orange. Before she started school she had crossed the Pacific Ocean three times. In her twenties she lived in Europe and Central America. Today she's happy to stay at home in San Diego with her husband, the attorney and poet Art Campbell, two rescued dogs, and three horses.
Loading...
or support indie stores by buying on