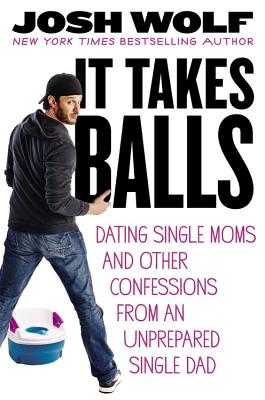 Dating Single Moms and Other Confessions from an Unprepared Single Dad

Josh Wolf--one of the stars and writers of Chelsea Lately and After Lately--delivers a hilarious collection of essays that reminds us all what it takes to conquer fatherhood without sacrificing manhood.

Struggling to make it as a stand-up comic didn't always fit with being a single parent. But Josh figured out his own set of rules--through trial and (frequent) error. Early picking up kids from school? The nearby strip club is a great place to kill time and bond with some like-minded dads. Want a drunken heart-to-heart with your son? First make sure there's no Sharpie around in case you pass out. Wondering where to take that special someone at the end of the night? Remember that no sane woman will have sex with you in a one-bedroom apartment where your kids are sleeping--even if you promise to be really, really quiet.

Whether it's revealing the secrets to limitless hookups (hint: it's single moms) and getting rid of your children's friends that you just can't stand (hint: it's not single moms), or blackmailing PTA members and ignoring health codes, Josh is sure to impart some parenting wisdom along the way. Or at least have a good time trying.

A stand-up comic for thirteen years, Josh Wolf has toured with Larry the Cable Guy, Chelsea Handler, and the Comedians of Chelsea Lately. His television work includes recurring roles on NBC's My Name Is Earl and Fox's Raising Hope. He has also hosted two seasons of the Fox Sports online series The College Experiment. He's currently a regular writer/performer on the E! hit series Chelsea Lately, and was a regular on the spin-off, After Lately.
Loading...
or
Not Currently Available for Direct Purchase