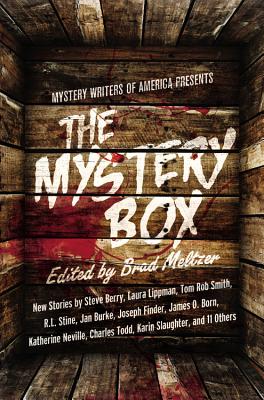 There's nothing more mysterious than a locked box. Whether it's a literal strongbox, an empty coffin, the inner workings of a scientist's mind, or an underground prison cell, there are those who will use any means necessary to unlock the secrets of...The Mystery Box.

With this anthology, bestselling author Brad Meltzer introduces twenty-one original stories from today's most prominent mystery writers. In Laura Lippman's "Waco 1982," a young reporter stuck with a seemingly mundane assignment on lost-and-found boxes unwittingly discovers a dark crime. In Joseph Finder's "Heirloom," a scheming neighbor frightens the new couple on the block with an unnerving tale of buried treasure. In R.L. Stine's "High Stakes," a man on his honeymoon gets drawn into a bizarre bet involving a coffin--a bet he may pay for with his life.

From the foothills of Mount Fuji to Georgia's Okefenokee Swamp, from a physics laboratory in wartime Leipzig to an unusual fitness club in Boca Raton, these sometimes terrifying, sometimes funny, and always suspenseful tales will keep you riveted to the page.

He is also the host of Brad Meltzer's Decoded on the History Channel, and Brad Meltzer's Lost History on H2. He currently lives in Florida. You can find much more about him at BradMeltzer.com. You can also see what he's doing right now at Facebook.com/BradMeltzer and on Twitter @bradmeltzer.
or
Not Currently Available for Direct Purchase