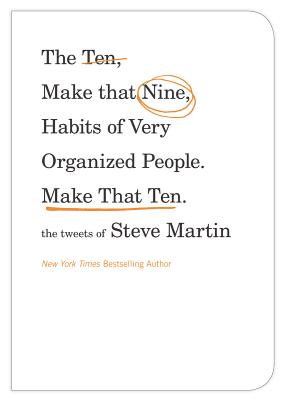 The Tweets of Steve Martin

The funniest, most memorable Twitter messages from comedian and bestselling author Steve Martin, along with hilarious responses from followers.

Steve Martin's uncanny ability to pack 140 characters with humor and wit has defined what it means to be a celebrity in today's world of social media. With over 8 million followers on Twitter (a number growing by the day), Martin's tweets have been covered by personal blogs, major news outlets, and everything in between.

Funny illustrations complement Martin's insights on everything from celebrity culture to jury duty to Twitter itself. Perfect, light reading for your hectic commute, busy waiting rooms, or a lazy Sunday afternoon, this collection will delight avid followers and offline fans alike.

Steve Martin is a legendary writer, actor, and performer. His film credits include Father of the Bride, Parenthood, The Spanish Prisoner, and Bringing Down the House, as well as Roxanne, L.A. Story, and Bowfinger, for which he also wrote the screenplays. He's won Emmys for his television writing and two Grammys for comedy albums. In addition to a play, Picasso at the Lapin Agile, he has written a bestselling collection of comic pieces, Pure Drivel, and a bestselling novella, Shopgirl, which was made into a movie. His work appears frequently in The New Yorker and The New York Times.
or
Not Currently Available for Direct Purchase
Copyright © 2020 American Booksellers Association