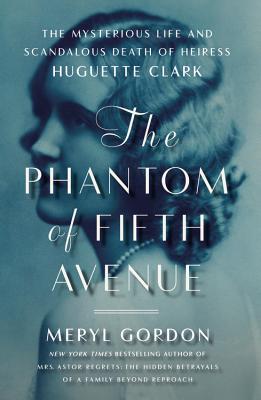 The Phantom of Fifth Avenue

The Mysterious Life and Scandalous Death of Heiress Huguette Clark

Born in 1906, Huguette Clark grew up in her family's 121-room Beaux Arts mansion in New York and was one of the leading celebrities of her day. Her father William Andrews Clark, was a copper magnate, the second richest man in America, and not above bribing his way into the Senate.

Huguette attended the coronation of King George V. And at twenty-two with a personal fortune of $50 million to her name, she married a Princeton man and childhood friend William MacDonald Gower. Two-years later the couple divorced. After a series of failed romances, Huguette began to withdraw from society--first living with her mother in a kind of Grey Gardens isolation then as a modern-day Miss Havisham, spending her days in a vast apartment overlooking Central Park, eating crackers and watching The Flintstones with only servants for company.

All her money and all her real estate could not protect her in her later life from being manipulated by shady hangers-on and hospitals that were only too happy to admit (and bill) a healthy woman. But what happened to Huguette that turned a vivacious, young socialite into a recluse? And what was her life like inside that gilded, copper cage?

Praise For The Phantom of Fifth Avenue: The Mysterious Life and Scandalous Death of Heiress Huguette Clark…

"[Gordon] is a tender and clear-eyed biographer; "The Phantom of Fifth Avenue" teases out the ways in which some human relationships, at their core, may always be transactional."
—New York Times

"How a vibrant young woman morphed into a doll-collecting recluse who spent her afternoons watching The Flintstones sounds like a dreary tale...But as Gordon's fine reporting reveals, it's also a deeply fascinating one."—Entertainment Weekly

"A thrilling read...Meryl Gordon delivers quite a page-turner for this true-life mystery."
—USA Today

"A perfect choice for the Grey Gardens set."—Booklist

"An engrossing account for those interested in the lengths that family, professionals, and others will go to appropriate the wealth of a seemingly desolate heiress."
—Library Journal

"Meryl Gordon masterfully depicts the life and times of one of New York's most eccentric millionaires...you won't want to put this book down."
—HamptonSheet.com

"Through her assiduous research...and canny analysis, Gordon gives us, yes, Clark's perplexing eccentricities and the ins and outs of the fight between family members and loyal-but-incompetent friends and helpers. But The Phantom of Fifth Avenue also offers a believable, sympathetic portrait of a vulnerable perfectionist with an artistic temperament."—Bookpage

"Meryl Gordon...paints a human, often heartbreaking portrait of the woman behind the legend. In her capable hands, Mrs. Clark's story becomes both page-turner and time capsule for an era gone by."
—Glamour.com

Meryl Gordon is the author of Mrs. Astor Regrets: The Hidden Betrayals of A Family Beyond Approach. She is an award-winning journalist and a regular contributor to Vanity Fair. She is on the graduate journalism faculty at New York University's Arthur L. Carter Journalism Institute. She is considered an expert on elder abuse and has appeared on NPR, CNN, and other outlets whenever there is a high-profile case.
Loading...
or
Not Currently Available for Direct Purchase