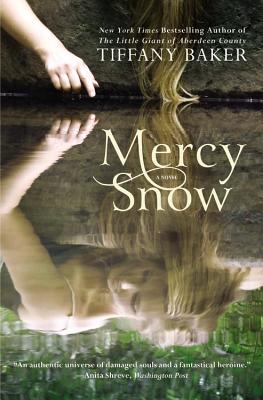 “Titan Falls, a small, sleepy town in New Hampshire where life fluctuates with the ups and downs of the local paper mill, gets roughly awakened when a school bus crashes into a ravine. The event brings two families into conflict: the Snow family, always known as good-for-nothing, has to fight for their survival in town when their son is accused of causing the accident; the McAllisters, owners of the mill and the leading family in town, court trouble as old secrets connected to the Snows threaten to be uncovered. This is a captivating story and a thrilling good mystery!”
— Jean-Paul Adriaansen, Water Street Books, Exeter, NH
View the List

In the tiny town of Titan Falls, New Hampshire, the paper mill dictates a quiet, steady rhythm of life. But one day a tragic bus accident sets two families on a course toward destruction, irrevocably altering the lives of everyone in their wake.

June McAllister is the wife of the local mill owner and undisputed first lady in town. But the Snow family, a group of itinerant ne'er-do-wells who live on a decrepit and cursed property, have brought her--and the town--nothing but grief.

June will do anything to cover up a dark secret she discovers after the crash, one that threatens to upend her picture-perfect life, even if it means driving the Snow family out of town. But she has never gone up against a force as fierce as the young Mercy Snow. Mercy is determined to protect her rebellious brother, whom the town blames for the accident, despite his innocence. And she has a secret of her own. When an old skeleton is discovered not far from the crash, it beckons Mercy to solve a mystery buried deep within the town's past.

Tiffany Baker is the author of The Gilly Salt Sisters and The Little Giant of Aberdeen County, which was a New York Times and San Francisco Chronicle bestseller. She holds an MFA (creative writing) and a PhD (Victorian Literature) from UC Irvine, and lives in the San Francisco Bay Area with her husband and three children.

Praise For Mercy Snow: A Novel…

"Strength and quiet beauty mark Baker's writing. . . . Her style perfectly suits the mood, time and place of this tale. Though it tells an old story that extends back at least to Shirley Jackson's "The Lottery," MERCY SNOW provides an authentic universe of damaged souls and a fantastical heroine."—Anita Shreve, Washington Post

"Tiffany Baker's raw and powerful writing almost reads like a screenplay in its simplicity, suspense and dialogue that jumps off the page...The town, the woods, the river, the blood of humans and beasts: they're all characters in Baker's novel, as important as any of its living women. That's what makes her writing so gripping. It's an experience that haunts long after the final page has been turned."—Toronto Star

"Tiffany Baker excels at creating offbeat characters with big hearts who live in difficult circumstances. Nineteen-year-old Mercy is unforgettable as she ekes out a living in the harshest of circumstances while caring for a young sister and battling the town's wrath. This third great novel, following "The Little Giant of Aberdeen County" and "The Gilly Salt Sisters," clinches Baker's place on the "must-read" list."—Judy Romanowich Smith, Minneapolis Star Tribune

"A gripping tale of love, justice, and redemption, set in a town where all three seem just a little out of reach. . . . Baker shines once again."—Publishers Weekly

"Appealing. . . Baker has managed to carve out her own niche in this rocky North Woods terrain, largely due to her deeply flawed but likable characters."—Kirkus Reviews

"I was completely swept away in this gothic tale of three women linked by secrets, some long buried, some far more recent. From the opening scene to the final page, Tiffany Baker kept me entranced in a novel so richly atmospheric that when I closed the cover, I was sure I could smell the paper mill on my clothes and hair, and hear the churn of the filthy Androscoggin River outside my door. Mercy Snow is a testament to the dark power of secrets; a power that can bind us together, or drive us apart."—Jennifer McMahon, author of The One I Left Behind and Island of Lost Girls