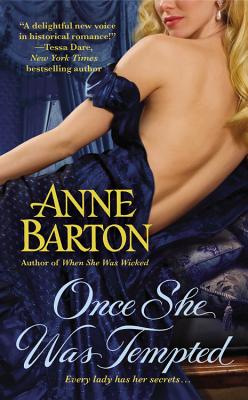 Once She Was Tempted (Honeycote #3)

A Portrait of a Lady

. . . or is it? The risque painting owned by Benjamin Elliot, the earl of Foxburn, features a stunning beauty with sapphire eyes, golden hair, and creamy skin. Ben recognizes this particular English rose the instant he meets her-though she's wearing considerably more clothing. In person, the demure debutante is even more irresistible . . .

In desperate need of money for her sick mother, Daphne Honeycote had posed for two scandalous portraits. Now she must hide her secret to save the Honeycote family name. Ben's possession of one painting makes him an insufferable thorn in her side-and yet he may be her best chance at finding the canvas's companion. As she becomes drawn to the dark-tempered earl, can Daphne risk laying bare the secrets of her heart?

Praise For Once She Was Tempted (Honeycote #3)…

RAVE REVIEWS FOR ONCE SHE WAS TEMPTED: "Anne Barton is a delightful new voice in historical romance! Once She Was Tempted is a charming read, with characters who are easy to love--a wounded earl and a determined heroine whose heart won't be denied."—Tessa Dare, New York Times bestselling author

"Fans of historical romance, especially books by Tessa Dare and Grace Burrowes, will enjoy Barton, who is proving to be an enticing new voice."
--Booklist—-

"Barton follows up When She Was Wicked with a delightful tale filled with sexual sizzle and banter. ...Barton's strong prose and wit will have readers clamoring for more."
-RT Book Reviews—-

WHEN SHE WAS WICKED: "Sensual and solid, this debut is a story demanding to be read. The characters are believable and relatable, and Barton smartly blends issues of morality and Regency era social class with passion and excitement."—Publisher's Weekly (Starred Review) on When She Was Wicked

"Stunning and heart melting...When She Was Wicked is a beautifully written regency Romance that I fell deeply in love with! Anne Barton has succeeded in writing the perfect debut. This is a must read that you do not want to miss!"—harlequinjunkie.com on When She Was Wicked

"4 stars! Delightfully smart, fun, fast-paced and just different enough for readers to take note of Barton's charming voice, this novel is filled with wry humor and compassion intrigues readers. The intrepid heroine, arrogant hero, memorable secondary characters and the colorful depiction of the era add to the reading enjoyment"
—RT Book Reviews on When She Was Wicked

"When She Was Wicked is a delightful debut! Anne Barton's cast of characters is charming and witty. Owen is the type of hero that readers fall in love with from the very first introduction, and Anabelle is ingenious and resourcefully cunning--a girl after my own heart."—Tiffany Clare on When She Was Wicked

"Break out the bubbly for Anne Barton's delightful debut!"
—Vicky Dreiling, award-winning author on When She Was Wicked