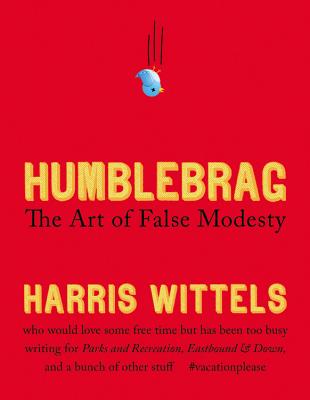 The Art of False Modesty

From comedian and writer (Parks and Recreation, Eastbound & Down) Harris Wittels comes a hysterical breakdown of boasts, brags, and self-adulation disguised as humble comments and complaints-based on his popular @humblebrag Twitter feed.


Something immediately annoyed Harris Wittels about Twitter. All of a sudden it was acceptable to brag, so long as those brags were ever-so-thinly disguised as transparent humility, such as:


"I hate when I go into a store to get something to eat and the male staff are too busy hitting on me to get my order right :( so annoying!"


Taking action by naming this phenomenon and creating the Twitter account called Humblebrag-dedicated solely to retweeting the humblebrags of others-Wittels's new word took the Internet by storm. Harris also shows readers what humblebrags might look like from some of history's most notable names, as well as devoting an entire chapter to a man who just might be the greatest humblebraggart of them all...

Praise For Humblebrag: The Art of False Modesty…

"Harris Wittels is a hilarious performer and writer and with this book he has coined a new term for that thing that drives us crazy. But honestly, I don't know how I feel about this whole thing. It makes me nervous." -Amy Poehler

"Great, Harris. This is a really good use of your time." -Mindy Kaling, comedian and NYT bestselling author of Is Everyone Hanging Out Without Me?

"HUMBLEBRAG: The Art of False Modesty is an amazing assembly of hilariousness and an anthology of heartbreaking insecurity. Enjoy it-but don't forget how sad it is." -Sarah Silverman, comedian and New York Times bestselling author of The Bedwetter

"I haven't read this, and never intend to, but Harris is my friend, so I feel obligated to give him a 'blurb' for his book. He's a funny writer...I'm sure it's not that bad." -Aziz Ansari, comedian, NBC's Parks and Recreation

"I can't believe they asked me of all people to blurb a bestselling book! Weird." -Bill Simmons, ESPN columnist and New York Times bestselling author of The Book of Basketball

"So weird to be asked to write a blurb for this amazing book when they passed over Alec Baldwin, Bono and The Pope. Like I'm ANYWHERE near as important as those guys. I mean, I DO have more Twitter followers than Baldwin. Oh well." -Patton Oswalt, comedian and New York Times bestselling author of Zombie Spaceship Wasteland

"Since the dawn of man, bragging has been evolving, growing more elusive and resilient. Thank you, Harris Wittels, for identifying the new strain, the "humblebrag." Humanity is forever in your debt. -Ezra Koenig, lead singer of Vampire Weekend

Harris Wittels has written for NBC's Parks and Recreation (on which he sometimes appears as Harris, the Animal Control guy). He has also written for HBO's acclaimed series, Eastbound & Down, Comedy Central's The Sarah Silverman Program, MTV's Human Giant, and the MTV Video Music Awards. He has several feature film projects in development with Universal, Mandate Pictures, and Scott Rudin Productions.

In addition to his writing, Wittels regularly tours the country performing stand-up comedy with such comics as Sarah Silverman, Louis C.K., and Aziz Ansari. His stand-up has been featured on Jimmy Kimmel Live!, Comedy Central's Live at Gotham, and Showtime's Live Nude Comedy. He was also on Variety's "10 Comics to Watch" list for 2011. Harris Wittels lives in Los Angeles, California.
Loading...
or support indie stores by buying on