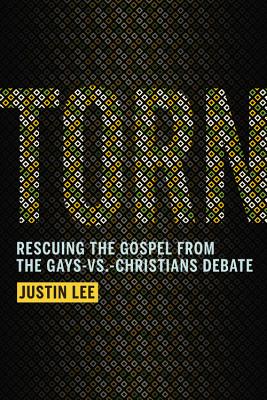 "Radiates a genuine concern and belief in progress through slow, personal evolution...Both LGBT individuals and Christians will benefit from the modeling of a kinder, more accommodating navigation of this culture war."—Publishers Weekly

"Lee's writing is approachable, and he shows compassion for those on all sides of this debate."—Kirkus Reviews

"In TORN, Justin Lee blends simplicity, clarity, humility, honesty, and vulnerability in a gracious and eye-opening way. The book brings fresh perspectives to old and polarized debates, and it offers a wise and faithful way forward for pastors and other Christian leaders, parents and other family members, not to mention gay men and women themselves. This is the book that every Evangelical, Charismatic, and Roman Catholic Christian should read on the question of homosexuality."
—Brian D. McLaren, author of Why Did Jesus, Moses, the Buddha, and Mohammed Cross the Road? Christian Identity in a Multi-Faith World (brianmclaren.net)

Justin's work has garnered national attention and praise from gays and Christians from across the theological spectrum. He has been featured in numerous print, radio, and television venues including Dr. Phil, Anderson Cooper 360, the Associated Press, and a front page article in The New York Times. He is the director of the 2009 documentary Through My Eyes about the debate's impact on young Christians, and the co-host of popular long-running podcast GCN Radio. Justin lives in Raleigh, NC.
Loading...
or
Not Currently Available for Direct Purchase