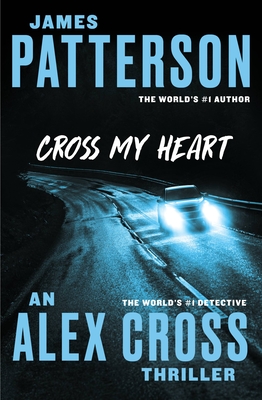 The stakes are higher than ever for Alex Cross as he faces his most personal enemy yet: a criminal who threatens his family.
Detective Alex Cross is a family man at heart: nothing matters more to him than his children, his grandmother, and his wife Bree. His love of his family is his anchor, and gives him the strength to confront evil in his work. One man knows this deeply, and uses Alex's strength as a weapon against him in the most unsettling and unexpected novel of James Patterson's career.
When the ones Cross loves are in danger, he will do anything to protect them. But if he does anything to protect them, they will die.
Cross My Heart is the most powerful Alex Cross novel ever, propelled by the ever-ingenious mind of James Patterson, the world's #1 bestselling writer.

"No one gets this big without amazing natural storytelling talent-which is what Jim has, in spades. The Alex Cross series proves it."—Lee Child

"Prepare yourself for one of the most gripping endings of any thriller in recent memory."—Jeffery Deaver

"Alex Cross is a legend. He has thrilled us and kept us on the edge of our seat for twenty years now."—Harlan Coben

"Every once in a while a writer comes along and fundamentally changes the way people read . . . James Patterson is the gold standard by which all others are judged."—Steve Berry

: "James Patterson is The Boss."—Ian Rankin

"Twenty years ago, I wrote, 'Along Came a Spider...should instantly make James Patterson a household name.' Congratulations, Jim, on 20 years of Alex Cross and on CROSS MY HEART, which I am loving. You The Man."—Nelson DeMille

"Patterson boils a scene down to the single, telling detail, the element that defines a character or moves a plot along. It's what fires off the movie projector in the reader's mind."—Michael Connelly

"The most terrifying and shocking Cross thriller to date, full of unexpected twists, savage turns, and electrifying suspense. This is the page-turner to end all page turners."—Douglas Preston & Lincoln Child

"Alex Cross is one of the best-written heroes in American fiction....Congratulations to James Patterson on 20 years of Alex Cross-both of you only get better and better. Simply put: Nobody does it better."—Lisa Scottoline
or support indie stores by buying on
Copyright © 2020 American Booksellers Association