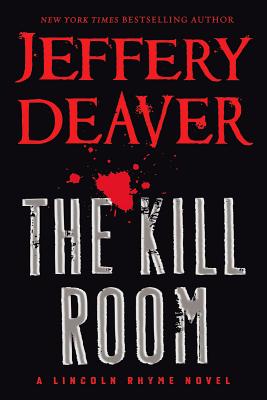 "This is Deaver at his very best and not to be missed by any thriller fan."—Publisher's Weekly (starred review) - A "Best Summer Book of 2013"

"Fans will appreciate Deaver's customary detailing of each plot sequence, thereby heightening their anticipation of the upcoming clincher. Thriller aficionados will be lining up for this one."—Library Journal

"Chillingly effective...Jeffery Deaver's quadriplegic detective has never been better...Equal parts Marathon Man and top-notch political thriller, this is Deaver at the top of his game. Rhyme remains the most original hero in thriller fiction today who may have met his match in Swann. Not to be missed."—Providence Sunday Journal

"Jeffery Deaver makes it all work, with style, in his latest thriller, The Kill Room...well-researched, expertly written and nicely paced."—The Columbus Dispatch

"Jeffery Deaver has written an ace thriller to keep readers guessing and gasping with his latest Lincoln Rhyme thriller, The Kill Room. A master magician with words, Deaver misdirects with one tale while what's really going on is just off the reader's radar...The numerous twists and turns in The Kill Room are so fast and furious that by the novel's end, the reader will be dizzy - and clamoring for more."—Associated Press

"If this contemporary story doesn't get your pulse racing, your head spinning and your adrenaline pumping then nothing will....If you are a person who enjoys a tight, twisted, terrific crime thriller which also has a personal story woven into it then you have to read Jeffery Deaver. He is one of the best writers on the scene today. His talent will knock your socks off."—The Huffington Post

"The Kill Room is very powerful in its exploration of current issues...This book is a page-turner with nothing as it seems to be, culminating in many surprise endings."—The Military Press

"Deaver delivers a dark tale of espionage, patriotism and egos as his clever detective puts the pieces of an intricately drawn jigsaw together while a killer targets his investigation."—RT Book Reviews