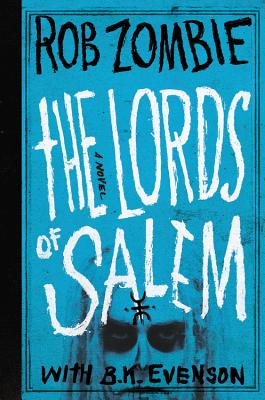 The Lords of Salem (Hardcover)

By Rob Zombie, B. K. Evenson

"The book offers a different experience from the film since it can obviously go into much more detail," says Rob Zombie. "The book and the film really complement each other."

From the singular mind of horror maestro Rob Zombie comes a chilling plunge into a nightmare world where evil runs in the blood...

THE LORDS OF SALEM

Heidi Hawthorne is a thirty-seven-year-old FM radio DJ and a recovering drug addict. Struggling with her newfound sobriety and creeping depression, Heidi suddenly receives an anonymous gift at the station-a mysteriously shaped wooden box branded with a strange symbol. Inside the box is a promotional record for a band that identifies themselves only as The Lords. There is no other information.

She decides to play it on the radio show as a joke, and the moment she does, horrible things begin to happen. The strange music awakens something evil in the town. Soon enough, terrifying murders begin to happen all around Heidi. Who are The Lords? What do they want?

As old bloodlines are awakened and the bodies start to pile up, only one thing seems certain: all hell is about to break loose.

Rob Zombie is a Grammy-nominated, multi-platinum hard rock artist and an established filmmaker. He wrote and directed the movies House of 1000 Corpses, The Devil's Rejects, Halloween, Halloween 2, and the animated film The Haunted World of El Superbeasto.

B.K. Evenson is the recipient of an International Horror Guild Award and the author of twelve books of fiction, most recently Immobility, which NPR called "merciless and unforgettable." Last Days won the American Library Association's award for best horror novel of 2010, and The Open Curtain was a finalist for an Edgar Award. He is also the author of an Aliens novel, two Dead Space novels, and a Halo novella. He lives and works in Providence, Rhode Island.
or
Not Currently Available for Direct Purchase
Copyright © 2020 American Booksellers Association