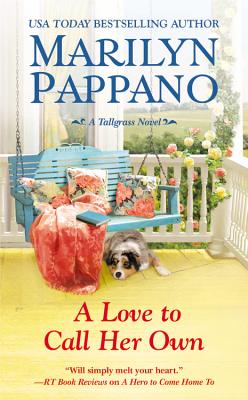 A Love to Call Her Own

It's been two years since Jessy Lawrence lost her husband in Afghanistan, and she's never fully recovered. Drowning her sorrows didn't help, and neither did the job she'd hoped would give her a sense of purpose. Now trying to rebuild her life, she finds solace in her best friends, fellow military wives who understand what it's like to love-and lose-a man in uniform . . . and the memory of one stolen night that makes her dream of a second chance at love.

Dalton Smith has known more than his fair share of grief. Since his wife's death, he revels in the solitude of his cattle ranch. But try as he might, he can't stop thinking about the stunning redhead and the reckless, passionate night they shared. He wasn't ready before, but Dalton sees now that Jessy is the only woman who can mend his broken heart. So how will he convince her to take a chance on him?

Known for her intensely emotional stories, Marilyn Pappano is the USA Today bestselling author of nearly eighty books. She has made regular appearances on bestseller lists and has received recognition for her work in the form of numerous awards. Though her husband's Navy career took them across the United States, he and Ms. Pappano now live in Oklahoma high on a hill that overlooks her hometown. They have one son and daughter-in-law, an adorable grandson, and a pack of mischievous dogs.

"Deeply satisfying...Pappano's characters are achingly real and flawed, and readers will commiserate with and root for the couple...This deeply moving tale will remind everyone who reads it of the great sacrifices made by those who serve and the families they leave behind."—Publishers Weekly (starred review) on A Love to Call Her Own

"A solid, tender plot, well-developed, vulnerable characters and smart, modern banter are the highlights of his heartwarming story."—RT Book Reviews on A Love to Call Her Own

"4 1/2 stars! Through her beautiful storytelling, Pappano deftly expresses the emotions that come with love and loss. The genuine love that grows between Therese and Keegan melts the heart. Pappano's latest packs a powerful punch."—RT Book Reviews on A Man to Hold on To

"A powerful and welcome return to Tallgrasss . . . Pappano excels at depicting deep emotion . . . including plenty of humor."—Publishers Weekly (starred review) on A Man to Hold on To

"Pappano shines in this poignant tale of love, loss, and learningto love again. [She] creates achingly real characters whose struggles will bring readers to tears."—Publisher's Weekly (starred review) on A Hero to Come Home To

"Pappano's latest is a touching story about loss, love and acceptance. Tender to the core, her story is filled with heartwarming characters who you can't help but fall in love with, and she tells their stories candidly and poignantly. The ending will simply melt your heart."—RT Book Reviews on A Hero to Come Home To
or
Not Currently Available for Direct Purchase
Copyright © 2020 American Booksellers Association