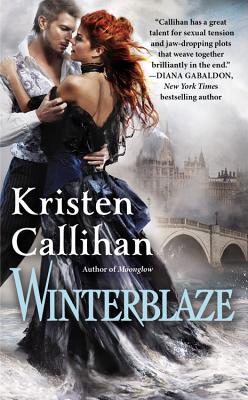 Once blissfully in love . . .
Poppy Lane is keeping secrets. Her powerful gift has earned her membership in the Society for the Suppression of Supernaturals, but she must keep both her ability and her alliance with the Society from her husband, Winston. Yet when Winston is brutally attacked by a werewolf, Poppy's secrets are revealed, leaving Winston's trust in her as broken as his body. Now Poppy will do anything to win back his affections . . .

Their relationship is now put to the ultimate test.
Winston Lane soon regains his physical strength but his face and heart still bear the scars of the vicious attack. Drawn into the darkest depths of London, Winston must fight an evil demon that wants to take away the last hope of reconciliation with his wife. As a former police inspector, Winston has intelligence and logic on his side. But it will take the strength of Poppy's love for him to defeat the forces that threaten to tear them apart.

USA Today bestselling author Kristen Callihan is a writer because there is nothing else she'd rather be. She is a three-time RITA nominee and winner of two RT Reviewers' Choice awards. Her novels have garnered starred reviews from Publishers Weekly and Library Journal, as well as being awarded top picks by many reviewers. Her debut book, Firelight, received RT Book Reviews' Seal of Excellence, was named a best book of the year by Library Journal, best book of Spring 2012 by Publishers Weekly, and was named the best romance book of 2012 by ALA RUSA. When she is not writing, she is reading.

"Top Pick! 4 1/2 Stars! Like all good things, Callihan just keeps getting better and better. The third installment in the Darkest London series is not only a gripping novel, but also one that elevates the genre with its depth of emotion, passion and mesmerizing storytelling. Callihan doesn't just create worlds, she moves readers into them with unforgettable characters and stunning revelations. Once begun, it's impossible to put down WINTERBLAZE."—RT Book Reviews

"Dark, dangerous, and totally enthralling, this latest edition to Callihan's Darkest London series treats fans to a heart-tugging, satisfying romance, fills in a few series blanks with well-handled flashbacks, and nicely sets the stage for stories that are sure to come."—Library Journal

"A sizzling paranormal with dark history and explosive magic! Callihan is an impressive new talent."—Larissa Ione, New York Times bestselling author of Immortal Rider on Firelight
or support indie stores by buying on
(This book is on backorder)
Copyright © 2020 American Booksellers Association