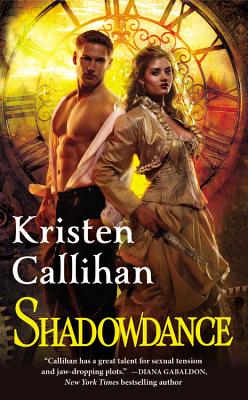 Once a heart is lost in shadow . . .
Life has been anything but kind to Mary Chase. But the Society for the Suppression of Supernaturals has given her purpose. Now she's been tasked with catching a vicious murderer dubbed the Bishop of Charing Cross. But someone is already on the case-and the last thing he relishes is a partner.

Only someone who lives in darkness can find it.
Jack Talent has been alone with his demons for many years.
He never expected to have the willful Mary Chase assist him on the Bishop case. Their age-old rivalry reaches new heights-even as their desire for one another reaches a fever pitch. Though he aches to bring her close, Jack's dark secrets are a chasm between them. With dangerous enemies closing in, Jack must find the strength to face the past . . . or risk losing Mary forever.

"Top Pick! From page 1, Kristen Callihan had me. She weaved a tale so powerful, so compelling, that I had no choice but to follow it through to the end. It's a rare talent, being able to do that, but Callihan has it."
—NightOwlReviews.com

"Callihan's solid worldbuilding draws the reader into 1885 London from the first page, and her lyrical writing will have readers racing to the thrilling finish."
—Publishers Weekly

"4 1/2 Stars! Top Pick! Like all good things, Callihan just keeps getting better and better. The third installment in the Darkest London series is not only a gripping novel, but also one that elevates the genre with its depth of emotion, passion and mesmerizing storytelling. Callihan doesn't just create worlds, she moves readers into them with unforgettable characters and stunning revelations. Once begun, it's impossible to put down WINTERBLAZE."
—RT Book Reviews on Winterbalze

"Top Pick! 4 1/2 Stars! Like moths to a flame, readers will be drawn to the flickering Firelight and get entangled in the first of the Dark London series. Combining Stephen King's Carrie and Beauty and the Beast, Callihan crafts a taut tale filled with sexual tension. This is one of the finest debuts of the season."
--- RT Book Reviews on Firelight—-

"Callihan has a great talent for sexual tension and jaw-dropping plots that weave together brilliantly in the end."
—Diana Gabaldon, New York Times bestselling author

USA Today bestselling author Kristen Callihan is a writer because there is nothing else she'd rather be. She is a three-time RITA nominee and winner of two RT Reviewers' Choice awards. Her novels have garnered starred reviews from Publishers Weekly and Library Journal, as well as being awarded top picks by many reviewers. Her debut book, Firelight, received RT Book Reviews' Seal of Excellence, was named a best book of the year by Library Journal, best book of Spring 2012 by Publishers Weekly, and was named the best romance book of 2012 by ALA RUSA. When she is not writing, she is reading.
Loading...
or support indie stores by buying on
(This book is on backorder)