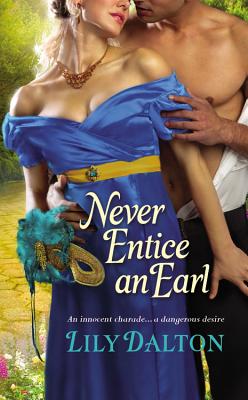 A ONE SCANDALOUS SEASON NOVEL

A Deception Most Reckless

Lady Daphne Bevington would do anything for her maid Kate-including masquerading as Kate and sneaking around the wrong side of London to settle the poor girl's debt. Yet her innocent ruse takes a scandalous turn when "Kate" runs into a handsome gentleman on a secret quest of his own. A moment of passion could cost Daphne her reputation, but how can she ignore the stranger's searing kiss?

An Arrangement Most Wicked

Lord Cormack Northmore is determined to find the immoral peer who ruined his sister. So when he learns that the irresistible woman he knows as "Kate" is the Season's most sought-after debutante, Cormack plans to use her connections to help him set a trap. Now, the closer Cormack gets to uncovering the villain who haunts the ton's ballrooms, the more he realizes that the lovely lady is in danger herself. Will he abandon his quest for revenge-or risk losing his one chance at love?

Praise For Never Entice an Earl (One Scandalous Season #2)…

"4 stars! In the second of the One Scandalous Season series, Dalton stirs the plot with sensuality, mistaken identity, danger, a woman's risk of scandal and a man's vow of retribution, and blends it all in this very touching love story."—RT Book Reviews

"Dalton's Regency debut resonates with real feeling...Unlike some one-note tortured heroes, Vane is sincere and appealing. Sophia's pain is very real, and every interaction is fraught with honest emotion. As they struggle to recapture their romance, readers will feel deep sympathy with both characters and hope for them to find happiness."
--Publishers Weekly starred review

"The first in Dalton's One Scandalous Season series grabs the reader's emotions in an intensely passionate love story, filled with misunderstandings, past indiscretions, trust and forgiveness. But, for all the intensity, this gifted storyteller also deftly lightens the mood in a very well-written and satisfying read by adding a few zany characters bent on mischief and mayhem."
--RT Book Reviews

Lily Dalton grew up as an Army brat, moving from place to place. Her first stop after relocating was always the local library, where she could hang out with familiar friends: Books! Lily has an English degree from Texas A & M University and after graduation worked as a legal assistant in the fields of accident reconstruction and litigation. She now lives in Houston, Texas, with her family. When she isn't at work on her next manuscript, she spends her time trying out new recipes, cheering on her favorite Texas football teams, and collecting old dishes, vintage linens, and other fine "junque" from thrift stores and flea markets.
or
Not Currently Available for Direct Purchase