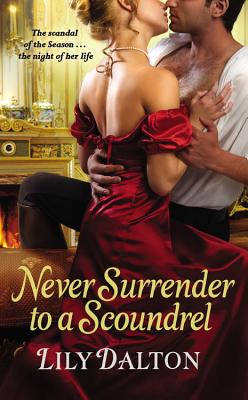 Never Surrender to a Scoundrel (One Scandalous Season #3)

A ONE SCANDALOUS SEASON NOVEL

Lady Clarissa Bevington is in trouble. A reckless indiscretion has left her with two choices: ruin her family with the scandal of the Season, or marry Mr. Kincraig, the notorious scoundrel mistaken as her lover. Desperate and disgraced, Clarissa vows to love and cherish a veritable stranger, a man whose eyes smolder with danger-and undeniable desire . . .

As an agent for the Crown, Lord Donovan Blackmer has spent the last two years guarding Clarissa's grandfather from an unknown assassin while disguised as the rakehell Kincraig. His mission may now be over, but his duty has just begun. Salvaging his beautiful, impetuous wife's virtue will cost him his fortune and his position as an officer-but it might save him from the ghosts that haunt his own past. When their marriage "in name only" leads to exquisite seduction, Donovan must risk the only thing he has left to lose . . . his heart.

Praise For Never Surrender to a Scoundrel (One Scandalous Season #3)…

"Dalton has delivered a tender story spiced with thrilling suspense."—Bookpage

NEVER SURRENDER TO A SCOUNDREL:

"With her knowledge of the era and talent for keeping readers immersed in her characters, Dalton delivers a wonderful story. Her pairing of an honorable hero, beset by a shade from his past, with a desperate heroine facing scandal is captivating, and the right amounts of poignancy and sensuality will entice readers."
--RT Book Reviews

"4 stars! In the second of the One Scandalous Season series, Dalton stirs the plot with sensuality, mistaken identity, danger, a woman's risk of scandal and a man's vow of retribution, and blends it all in this very touching love story."—RT Book Reviews on Never Entice an Earl

"Dalton's Regency debut resonates with real feeling...Unlike some one-note tortured heroes, Vane is sincere and appealing. Sophia's pain is very real, and every interaction is fraught with honest emotion. As they struggle to recapture their romance, readers will feel deep sympathy with both characters and hope for them to find happiness."
--Publishers Weekly starred review

"The first in Dalton's One Scandalous Season series grabs the reader's emotions in an intensely passionate love story, filled with misunderstandings, past indiscretions, trust and forgiveness. But, for all the intensity, this gifted storyteller also deftly lightens the mood in a very well-written and satisfying read by adding a few zany characters bent on mischief and mayhem."
--RT Book Reviews

"Never Desire a Duke is a terrific debut novel-it reminded me of Lisa Kleypas' most memorable novels with a to-die-for hero and a lovely but heartbroken heroine. It's an intensely beautiful, moving story (but it does have its funny moments) and you won't be able to help yourself-you'll be rooting for them to get back together."
-EverAfter.com.au

Lily Dalton grew up as an Army brat, moving from place to place. Her first stop after relocating was always the local library, where she could hang out with familiar friends: Books! Lily has an English degree from Texas A & M University and after graduation worked as a legal assistant in the fields of accident reconstruction and litigation. She now lives in Houston, Texas, with her family. When she isn't at work on her next manuscript, she spends her time trying out new recipes, cheering on her favorite Texas football teams, and collecting old dishes, vintage linens, and other fine "junque" from thrift stores and flea markets.
or
Not Currently Available for Direct Purchase