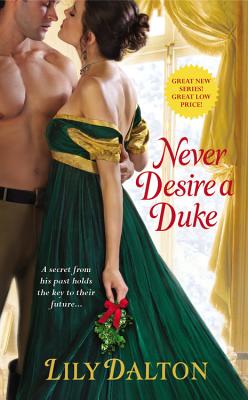 A Marriage Beyond Hope

Lady Sophia has long been estranged from her husband, Vane Barwick, the Duke of Claxton, whose rumored list of amorous conquests includes almost every beautiful woman of the ton. Yet a shocking encounter with him in a crowded ballroom-and a single touch-are all it takes to reawaken her furious passion for him. But how can she trust the man who crushed her dreams and took away the one thing she wanted most?

A Love Beyond Reason

Claxton has never forgiven himself for the youthful mistake that ruined his marriage to Sophia. Now, after nearly a year abroad, the reformed rogue vows to win back the only woman he's ever truly loved. He'll do whatever it takes to prove he can be the honorable husband she deserves-and the passionate lover she desires. As the snowdrifts deepen outside their ancestral home, can they rekindle the flame that burned so bright and find a new path to forever?

Praise For Never Desire a Duke (One Scandalous Season #1)…

"Dalton's Regency debut resonates with real feeling...Unlike some one-note tortured heroes, Vane is sincere and appealing. Sophia's pain is very real, and every interaction is fraught with honest emotion. As they struggle to recapture their romance, readers will feel deep sympathy with both characters and hope for them to find happiness."—--Publishers Weekly starred review

"The first in Dalton's One Scandalous Season series grabs the reader's emotions in an intensely passionate love story, filled with misunderstandings, past indiscretions, trust and forgiveness. But, for all the intensity, this gifted storyteller also deftly lightens the mood in a very well-written and satisfying read by adding a few zany characters bent on mischief and mayhem."—--RT Book Reviews

"Never Desire a Duke is a terrific debut novel--it reminded me of Lisa Kleypas' most memorable novels with a to-die-for hero and a lovely but heartbroken heroine. It's an intensely beautiful moving story (but it does have it's funny moments) and you won't be able to help yourself--you'll be rooting for them to get back together."—The Ever After Romance Book Specialists www.everafter.com

Lily Dalton grew up as an Army brat, moving from place to place. Her first stop after relocating was always the local library, where she could hang out with familiar friends: Books! Lily has an English degree from Texas A & M University and after graduation worked as a legal assistant in the fields of accident reconstruction and litigation. She now lives in Houston, Texas, with her family. When she isn't at work on her next manuscript, she spends her time trying out new recipes, cheering on her favorite Texas football teams, and collecting old dishes, vintage linens, and other fine "junque" from thrift stores and flea markets.
Loading...
or
Not Currently Available for Direct Purchase