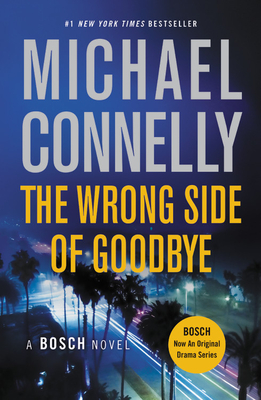 The Wrong Side of Goodbye (A Harry Bosch Novel #19)

In this #1 New York Times bestseller, California's newest private investigator, Detective Harry Bosch, must track down a missing heir while helping a police department connect the dots on a dangerous cold case.
Harry Bosch is California's newest private investigator. He doesn't advertise, he doesn't have an office, and he's picky about who he works for, but it doesn't matter. His chops from thirty years with the LAPD speak for themselves.

Soon one of Southern California's biggest moguls comes calling. The reclusive billionaire is nearing the end of his life and is haunted by one regret. When he was young, he had a relationship with a Mexican girl, his great love. But soon after becoming pregnant, she disappeared. Did she have the baby? And if so, what happened to it?

Desperate to know whether he has an heir, the dying magnate hires Bosch, the only person he can trust. With such a vast fortune at stake, Harry realizes that his mission could be risky not only for himself but for the one he's seeking. But as he begins to uncover the haunting story--and finds uncanny links to his own past--he knows he cannot rest until he finds the truth.

Swift, unpredictable, and thrilling, The Wrong Side of Goodbye shows that Michael Connelly "continues to amaze with his consistent skill and sizzle" (Cleveland Plain Dealer).

Praise for The Wrong Side of Goodbye:

"....a powerful, Macdonald-esque meditation on the claims the past exerts on the present. Few mystery novelists make background facts and simple descriptions sing the way this writer does. And no writer exploits Los Angeles - its geography, its historical power wars, its celebrity culture, its lore - as compellingly as Connelly....he must be read."
—Lloyd Sachs, Chicago Tribune

"If any novelist is worthy to walk once more through the front door of Raymond Chandler's iconic Sternwood mansion, it's Michael Connelly. For over two decades, Connelly has been brilliantly updating and enlarging the possibilities of the classic L.A. hard-boiled novel, first bestowed upon the world in 1939 with Chandler's debut, The Big Sleep. This latest Bosch outing is its own accomplishment: brooding and intricate, suspenseful and sad. In short, it's another terrific Michael Connelly mystery....a master of the genre."
—Maureen Corrigan, Washington Post

"Connelly has created in Bosch one of the great characters in contemporary crime fiction."—Colette Bancroft, Tampa Bay Times

"Michael Connelly is the master of the universe in which he lives, and that is the sphere of crime thrillers. This man is so good at what he does.... THE WRONG SIDE OF GOODBYE is the twenty first Harry Bosch story and it is just as good or better than the first one was. Nobody writes like Connelly, nobody. He is unique in his style and also in the character of Harry Bosch he has created. If you read one page about Harry Bosch as written by Michael Connelly you will be hooked for life."
—Jackie K. Cooper, Huffington Post

"It is impossible for Connelly to tell a bad story. Moving effortlessly between Bosch's private and public cases, he ratchets up the tension...pulling off in the final few chapters a California noir sleight of hand that would make Ross Macdonald envious."
—Robert Anglen, The Arizona Republic

"In each novel, Connelly has dug deeper into Harry's psyche, as he skillfully does in The Wrong Side of Goodbye....Connelly's melding of the police procedural, private detective novel and intense character study remains solid. Harry isn't with the LAPD anymore, but readers will be glad to know he is still on the job."—Oline H. Cogdill, South Florida Sun Sentinel

"....it is immensely satisfying to see Bosch's sustained and deepened passion for his mission- "Everybody count or nobody counts" - undiminished by age or circumstance, even as a younger generation of detectives of all colors and orientations share the stage to carry on the work that has given Bosch, and this series, such an enduring appeal. Harry Bosch and his law enforcement heirs are still fighting the good fight, luckily, for us all."
—Paula L. Woods, Los Angeles Times

"It is a disturbing and yet cathartic tale-within-a-tale that proves once again what a master storyteller Connelly is."
—Bruce Tierney, BookPage

"Connelly continues to discover new depths to his character and new stories to tell that reveal those depths in always compelling ways. Hats off one more time to a landmark crime series."—Bill Ott, Booklist (starred review)

"Michael Connelly writes with a seamless unity of tone and pace that makes reading his crime novels absolutely effortless and totally engaging...his narrative rolls out in a perfect parade of action, memory, emotion, color and tension."
—Margie Romero, Pittsburgh Post-Gazette

"....lots of surprises and surprise endings. Bosch's legion of readers will come away entertained - and gratified that in his acknowledgments, Connelly all but promises yet another Bosch tale."—Harry Levins, St. Louis Post-Dispatch

"Irresistible...Connelly nods to his early inspiration Raymond Chandler while strengthening his own claim to the mystery writers' pantheon."—Colette Bancroft, Tampa Bay Times

Michael Connelly is the author of twenty-eight previous novels, including #1 New York Times bestsellers The Crossing and The Burning Room. His books, which include the Harry Bosch series and Lincoln Lawyer series, have sold more than sixty million copies worldwide. Connelly is a former newspaper reporter who has won numerous awards for his journalism and his novels and is the executive producer of Bosch, starring Titus Welliver. He spends his time in California and Florida.
Loading...
or support indie stores by buying on