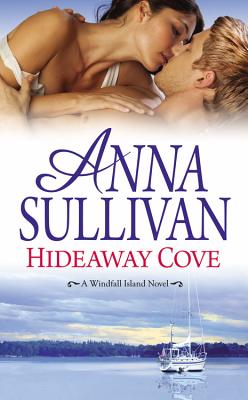 Jessi Randal walked away from her last relationship with a baby and a broken heart. Now, years later, the last thing this single mom wants is to give Windfall Island-and all its nosy residents-anything more to gossip about. But the moment she lays eyes on the tall, sexy stranger with the slow Southern drawl, she knows she's in delicious trouble . . .

Holden Abbot is on the island to find the missing heir to the Stanhope family fortune. It's his job to charm as many secrets out of the town as possible. And if he can charm Jessi into his bed, even better. When all evidence points to her as the heir, a dangerous enemy sets his sights on Jessi and her son. Now Holden will have to risk everything to protect the family he's come to love.

Anna Sullivan was born and raised in southeastern Michigan, the seventh of nine children, whose claim to fame was reading five books a week in grade school. Needless to say, her obsession with the written word only grew from there-despite a short, and misguided, foray into the world of computer science (the "sensible" job path). She still lives in Michigan, with her husband, three children and two dogs whose life of leisure she envies but would never be able to pull off.

"4 stars! Fans of Sullivan's beautiful, remote
Windfall Island will thoroughly enjoy this
return to the familiar craggy landscape
of her Maine setting, and new readers
deserve to discover this fascinating place.
The carefully structured plot is sound and
the mystery element of the story grows
organically to a startling, suspenseful
conclusion. However, the best part of this
book, by far, is the honest, challenging
and tremendously passionate relationship
that develops between this wary heroine
and the charming stranger who turns her
world around."—RT Book Reviews on Hideaway Cove

"4 stars! Sullivan brings a sensational sense of place to her first Windfall Island novel, immersing readers in the Maine island and its fascinating population - most notably her heroine, whose fortitude and no-nonsense exterior cover a heart of gold. Sullivan builds the tension between her lead characters and crafts a relationship so compassionate and reciprocal it is simply irresistible."—RT Book Reviews on Temptation Bay
or
Not Currently Available for Direct Purchase
Copyright © 2020 American Booksellers Association