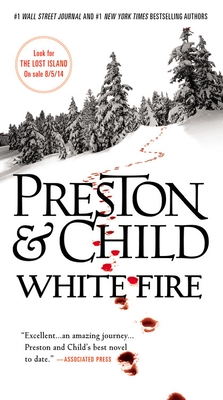 "Another highly entertaining and genuinely thrilling story from Preston & Child starring their romantic, faintly gothic, and always mysterious FBI agent, Aloysius Pendergast. As always the prose is elegant, replete with exquisite descriptions, and this time we're treated to dashes of historic characters Conan Doyle and Oscar Wilde, as well as a positively delicious serving of the great Sherlock Holmes. Through myriad shocks, surprises, twists and turns, the suspense never lets up. Great fun to the last page."
—Anne Rice

"A mile-a-minute thriller with a deeply entertaining plot and marvelous characters, in a setting that will chill your blood, and not only because it's 10 degrees below zero and covered with snow. My copy is full of crumbs because I couldn't put it down long enough to eat."
—Diana Gabaldon

"WHITE FIRE is as incandescent as its title, a beautifully organized, tautly paced book that really did just yank me in and demand that I keep reading. I'm very grateful for the experience."
—Peter Straub

"Preston and Child have created a terrific mix of mystery and the unexpected that will keep you reading into the late hours of the night. They promise a great read and they have delivered."
—Clive Cussler

"Preston and Child continue their dominance of the thriller genre with stellar writing and twists that come at a furious pace. Others may try to write like them, but no one can come close. The best in the business deliver another winner."
—RT Book Reviews on Cold Vengeance

"This is no dream; it's the authors' best book in years. Pendergast has to rein in his feelings to pay attention to the details, and it's fun to see the role reversal between him and the usually emotional D'Agosta. Not to be missed by either newcomers or die-hard fans."
—Library Journal (starred review) for Fever Dream