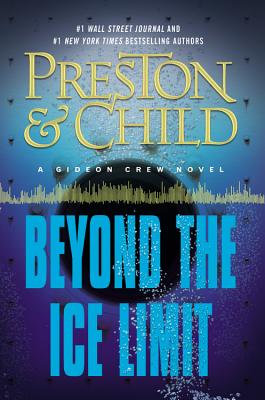 Praise For Beyond the Ice Limit: A Gideon Crew Novel (Gideon Crew Series)…

"Preston & Child take all of the various elements from classic horror and sci-fi films and novels and spin them together to write what begins as an action adventure, but soon delves into paranoid terror ... scary good fun."—Associated Press

"The always sensational duo is back with a work that is as exciting and intriguing as it is fast-paced."—Suspense Magazine

"This duo is magnificent. Preston and Child are incredibly smart writers; technically they are perfect. There's never an errant word or situation. [BEYOND THE ICE LIMIT] moves fast but with purpose and you know that everything is precisely researched...And a lot is at stake-namely Earth as we know it. That's not an overstatement."—Sunday Star-Ledger

"Douglas Preston and Lincoln Child are no strangers to breaking new ground, but the shovel they use for the beautifully conceived BEYOND THE ICE LIMIT is tipped with gold. Forget thrill on every page - this book seems to have one in every paragraph, starting with "That thing is growing again. We must destroy it."....BEYOND THE ICE LIMIT is pure fun, its wildly imaginative premise and take-no-prisoners plotting making this reading entertainment of the highest order."—Providence Sunday Journal

"The Lost Island, the third novel to feature master thief and brilliant scientist Gideon Crew, is another clever and compelling tale from Douglas Preston and Lincoln Child....The stellar writing that readers expect from Preston and Child is still in abundance, and they balance the line between page-turning suspense and ancient history."—Associated Press on The Lost Island

"Sparkling...Gideon refreshingly doesn't fit the superhero mold, and the enigmatic Amy is more than his equal in daring and intelligence."—Publishers Weekly on The Lost Island

"The ever-reliable Doug Preston and Lincoln Child are back with typical aplomb in the splendid The Lost Island. Preston and Child have been in the business of keeping secrets for years now and simply no one's better at knowing just how long to keep them... wildly entertaining and lightening paced... impossible to put down."—Providence Sunday Journal on The Lost Island

"When it comes to novels by this famous duo, the things all readers can expect are excitement, intrigue, and a story that will not soon be forgotten...The 'Crew' stories move at a super-fast pace and never leave the reader wanting...[This is] yet another perfectly unforgettable Preston & Child creation."—Suspense Magazine on The Lost Island

"Like Michael Crichton, Preston and Child weave their stories at a thrilling pace...Preston and Child never fail to entertain. And Gideon's Corpse is a thriller that ranks high among their many co-authored offerings to date."—BookReporter.com

Preston and Child are co-authors of the Agent Pendergast series as well as the Gideon Crew series. Their novels Relic and The Cabinet of Curiosities were chosen in an NPR poll as two of the hundred greatest thrillers ever written. Preston's acclaimed nonfiction book, The Monster of Florence, is being made into a movie. Lincoln Child has published six novels of his own, including the bestseller The Forgotten Room.
Loading...
or
Not Currently Available for Direct Purchase