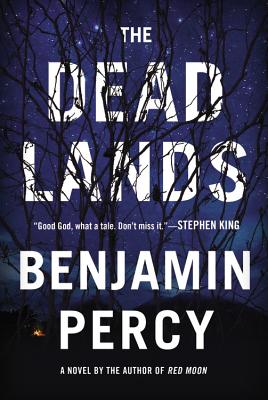 "Benjamin Percy's THE DEAD LANDS is a case of wonderful writing and compulsive reading. You will not come across a finer work of sustained imagination this year. Good God, what a tale. Don't miss it."
—Stephen King

"THE DEAD LANDS is a gripping and inventive adventure about the resilience of the human species. Benjamin Percy may conjure a future that's brutal and dark, but it's not without bravery, compassion, and love. He is a truly gifted storyteller."
—Edan Lepucki, author of California

"THE DEAD LANDSis a bomb-blast of a novel, casting its tremors in every direction. Benjamin Percy's range grows broader with every book he writes. Here he takes a journey across a cataclysmic future American West, sending his band of seekers, scholars, assassins, and explorers through a landscape as dangerous and surreal as it must have seemed to the original Lewis and Clark. Their adventure, like the novel itself, travels far past the frontier, into the deepest and most thrilling of wildernesses."—Kevin Brockmeier, author of The Brief History of the Dead

"This post-apocalyptic reimagining of the Lewis and Clark passage is a thrill ride through a nightmare America. THE DEAD LANDS is gorgeous and haunting and full of heart, like some wonderful offspring of The Hobbit, The Road, and Stephen King's Dark Tower series."—James Frey, author of Bright Shiny Morning and Endgame

"[A] visionary thriller ...With its fluid integration of reflections on American values and freedoms into a near-future scenario whose dramas resonate with the contemporary zeitgeist, this novel is a reminder that the best speculative fiction speaks to the concerns and issues of its time."
—Publisher's Weekly, starred review

"Percy offers a tip of the hat to American explorers Lewis and Clark in this harrowing post apocalyptic thriller. . . . Percy uses his gift for literary horror, as seen in Red Moon, to create a compelling and at times disturbing story that will leave readers wanting more."—Booklist (starred review)

"A compelling post apocalyptic adventure populated by fascinating characters [and] a clever riff on the Lewis and Clark expedition. Fans of Cormac McCarthy's The Road, Paolo Bacigalupi's Ship Breaker, and Emily St. John Mandel's Station Eleven will embrace the literary vision of humanity's first steps back up the ladder of civilization after near-extinction disasters."—Library Journal (starred review)

"A great read no matter how you approach it."
—NPR

"An elegantly written post-apocalyptic adventure."
—Forth Worth Star-Telegram

"A fast-moving plot and a memorable, if horrifying, vision of a world where strange beauty survives even in the worst ruins."
—Columbus Dispatch

"The novel is finely crafted and relentlessly inventive. Percy writes with a strong line, his rhythms incantatory and musical. The book crackles with action and adventure, and his descriptions of the wonders and disasters along the trail are as vivid as any accounts from the Corps of Discovery journals...Like the journals, THE DEAD LANDS will often take your breath away."
—Washington Post

"Percy employs some of his best prose...dark and entertaining"
—The Dallas Morning News

"Percy has both a cinematic and a scientific eye, able to evoke a Road Warrior-esque vibe as much as he can break down some hard facts on the scary repercussions of a pandemic of this scale."—Paste

"In Percy's dark world, he presents a post-apocalyptic retelling of the Lewis and Clark expedition, in a world rocked by super flu and nuclear war."
—New York Post

"Percy... is a fantastic writer who packs an emotional wallop in this page-turner."
—The Aspen Times

"Percy's story is layered with allusions to other quest narratives and his prose. . .displays a kind of alchemy all its own."
—The Sunday Journal Sentinel