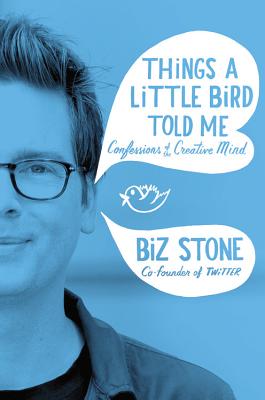 Things a Little Bird Told Me

Confessions of the Creative Mind

Biz Stone, the co-founder of Twitter, discusses the power of creativity and how to harness it, through stories from his remarkable life and career.

Things a Little Bird Told Me

From GQ's "Nerd of the Year" to one of Time's most influential people in the world, Biz Stone represents different things to different people. But he is known to all as the creative, effervescent, funny, charmingly positive and remarkably savvy co-founder of Twitter-the social media platform that singlehandedly changed the way the world works. Now, Biz tells fascinating, pivotal, and personal stories from his early life and his careers at Google and Twitter, sharing his knowledge about the nature and importance of ingenuity today. In Biz's world:

In this book, Biz also addresses failure, the value of vulnerability, ambition, and corporate culture. Whether seeking behind-the-scenes stories, advice, or wisdom and principles from one of the most successful businessmen of the new century, Things a Little Bird Told Me will satisfy every reader.

Praise For Things a Little Bird Told Me: Confessions of the Creative Mind…

"Things A Little Bird Told Me is a moving, funny and illuminating life story, and Biz pours himself into the telling, bringing a unique gift of perspective to anyone dreaming of taking risks, changing their lives and changing the world." --Arianna Huffington

"In THINGS A LITTLE BIRD TOLD ME, Biz gives away all his secrets to success. I advised him against it. If you're not inspired and informed by this book, then you haven't read it." --Stephen Colbert

"Biz Stone's anything-but-ordinary journey both surprises and inspires. Things A Little Bird Told Me is a peek into a unique mind that, I'm happy to add, entertains us as well." --Ron Howard

"As someone who has personally experienced Biz's generosity and genius, I'm thrilled that readers of Things a Little Bird Told Me can now draw inspiration from his values and vision. A must-read for anyone who wants to tap their creative potential." --Charles Best, Founder and CEO of DonorsChoose.org

"Most tales of startup success revolve around a lone genius out-maneuvering the competition. But the story Biz Stone tells is a riveting-and often hilarious-break from that tradition: a story of collaboration, sharing, and the power of networks."--Steven Johnson, New York Times bestselling author of Where Good Ideas Come From

Biz Stone became an Internet entrepreneur in 1999. He went on to work for Google, helped to create both blogging and podcasting, and then co-invented Twitter.

Most recently, Biz is founder and CEO of his newest venture, Jelly. He lives near San Francisco, California with his wife and son.
twitter.com/@Biz
facebook.com/BizStone
ThingsaLittleBirdToldMe.com
Loading...
or
Not Currently Available for Direct Purchase