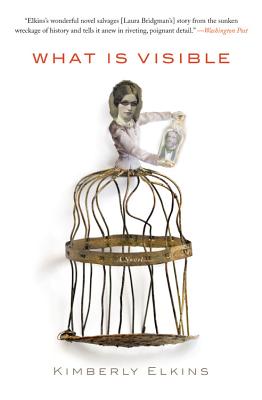 What Is Visible (Paperback)

Woman's Day "Most Inspirational Book of 2014"

Deeply enthralling and rich with lyricism, WHAT IS VISIBLE chronicles the breathtaking experiment that Laura Bridgman embodied and its links to the great social, philosophical, theological, and educational changes rocking Victorian America. Given Laura's worldwide fame in the nineteenth century, it is astonishing that she has been virtually erased from history. WHAT IS VISIBLE will set the record straight. *Includes Reading Group Guide*

Kimberly Elkins was a finalist for the National Magazine Award and has published fiction and nonfiction in the Atlantic, Best New American Voices, Iowa Review, Chicago Tribune, Glamour, and Village Voice, among others. WHAT IS VISIBLE is her first novel.

"I know firsthand how brutally difficult it is to write a creatively rich, humanly revealing novel based on real people in a distant time. Kimberly Elkins does this brilliantly. WHAT IS VISIBLE is not only a compelling, deeply moving novel, it is a fully realized work of art. This is an auspicious debut of an important new writer."—Robert Olen Butler, Pulitzer Prize-winning author of A Good Scent from a Strange Mountain

"WHAT IS VISIBLE is remarkable at many levels. It is written in an intelligent, intricate style, populated with many true historical figures, and teeming with convincing period details. Above all, the novel has a unique narrative structure, which illustrates the art of fiction at its best in presenting the interior. A splendid debut indeed."—Ha Jin, National Book Award Winner for Waiting

"An astonishing debut that vividly brings to life a forgotten chapter of American history. You'll recognize many of the characters in WHAT IS VISIBLE, but its heroine, Laura Bridgman, is likely someone you've never heard of. After you read it, you'll never forget her. Beautiful, heart-wrenching, and at times quite funny, this book is a marvel."—J. Courtney Sullivan, New York Times bestselling author of Maine and The Engagements

"I found myself slowly mesmerized by WHAT IS VISIBLE, and then increasingly haunted and bound to the story of Laura Bridgman, the second, deeper, darker invisibility of her life so permanently excavated and restored to memory by the talented hand of Kimberly Elkins and her extraordinary powers of imagination. To say that I was profoundly moved by this novel would be an understatement."—Bob Shacochis, author of The Woman Who Lost Her Soul

"A wonderfully imaginative and scrupulously researched debut novel... [The protagonist] comes across as a willful, mysterious marvel, showing 'how little one can posses of what we think it means to be human while still possessing full humanity.'"—Publishers Weekly (STARRED)