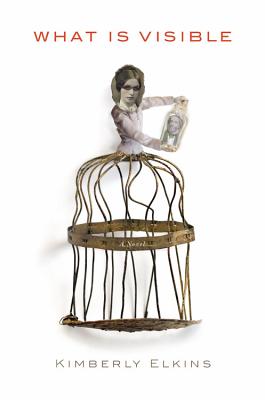 Deeply enthralling and rich with lyricism, What is Visible chronicles the breathtaking experiment that Laura Bridgman embodied and its links to the great social, philosophical, theological, and educational changes rocking Victorian America. Given Laura's worldwide fame in the nineteenth century, it is astonishing that she has been virtually erased from history. What is Visible will set the record straight.

"WHAT IS VISIBLE contemplates the bare requisites of being human, more fundamentally than most meditations on haves and have-nots... A novel's extraordinary power is to allow a reader to take possession of the inner life of another. This one provides entrée to a nearly unthinkable life, and while no one would want to live there, it's a fascinating place to visit."
—Barbara Kingsolver, New York Times Book Review

"Kimberly Elkins gives Bridgman her defiant due in reimagining her fascinating, now-forgotten story... The world Elkins discovers within is anything but muted. In tactile prose, she evokes a soul and a body with hungers (yes, there is sex) that none of Bridgman's guides begins to imagine."
—The Atlantic Magazine

"Kimberly Elkins's wonderful novel salvages [Laura Bridgman's] story from the sunken wreckage of history and tells it anew in riveting, poignant detail... "What is Visible" illuminates the historical blindness of men - and women's struggles to be seen and heard. The novel is infused with longing and rich with detail about the social reforms of the Victorian era, the quest for rights and freedom for women and slaves, for the disabled and the poor.... Elkins makes this great American woman visible again, in all her remarkable, fully human complexity."
—The Washington Post

"The best historical fiction offers readers a new look at a well-known subject, or illuminates an episode or individual that has been lost to history. Playwright Kimberly Elkins achieves the latter in What Is Visible, a strikingly original debut novel."
—BookPage Fiction Top Pick, June 2014

"WHAT IS VISIBLE is remarkable at many levels. It is written in an intelligent, intricate style, populated with many true historical figures, and teeming with convincing period details. Above all, the novel has a unique narrative structure, which illustrates the art of fiction at its best in presenting the interior. A splendid debut indeed."
—Ha Jin, National Book Award Winner for Waiting

"I know firsthand how brutally difficult it is to write a creatively rich, humanly revealing novel based on real people in a distant time. Kimberly Elkins does this brilliantly. WHAT IS VISIBLE is not only a compelling, deeply moving novel, it is a fully realized work of art. This is an auspicious debut of an important new writer."
—Robert Olen Butler, Pulitzer Prize-winning author of A Good Scent from a Strange Mountain

"An astonishing debut that vividly brings to life a forgotten chapter of American history. You'll recognize many of the characters in WHAT IS VISIBLE, but its heroine, Laura Bridgman, is likely someone you've never heard of. After you read it, you'll never forget her. Beautiful, heart-wrenching, and at times quite funny, this book is a marvel."
—J. Courtney Sullivan, New York Times bestselling author of Maine and The Engagements

"I found myself slowly mesmerized by WHAT IS VISIBLE, and then increasingly haunted and bound to the story of Laura Bridgman, the second, deeper, darker invisibility of her life so permanently excavated and restored to memory by the talented hand of Kimberly Elkins and her extraordinary powers of imagination. To say that I was profoundly moved by this novel would be an understatement."
—Bob Shacochis, author of The Woman Who Lost Her Soul

"A wonderfully imaginative and scrupulously researched debut novel... [The protagonist] comes across as a willful, mysterious marvel, showing 'how little one can posses of what we think it means to be human while still possessing full humanity.'"
—Publishers Weekly (STARRED)

"An affecting portrait which finally provides its idiosyncratic heroine with a worthy voice."
—Kirkus Reviews

"Told in alternating chapters by Laura, Howe, his poet wife, and Laura's beloved teacher, this is a complex, multilayered portrait of a woman who longed to communicate and to love and be loved. Elkins fully captures her difficult nature and her relentless pursuit of connection."
—Booklist

Kimberly Elkins was a finalist for the National Magazine Award and has published fiction and nonfiction in the Atlantic, Best New American Voices, Iowa Review, Chicago Tribune, Glamour, and Village Voice, among others. What Is Visible is her first novel.

1. How did reading What Is Visible affect your ideas about sensory perception. Have you ever tried to imagine what it would be like to live with only one sense?

2. How did the multiple narrators featured in the book—Laura, Julia, Dr. Howe, Sarah— impact the storytelling for you? Who was your favorite narrator? Who was your least favorite? How would the story have been different if only one character told it?

3. How did the knowledge that What is Visible is based on historical fact influence your reading of the novel? How do you think fictionalizing a life, or writing a book “based” on a real historical person, influences our understanding of that character and their life and times?

4. Since Laura cannot see, what do you think the title, What Is Visible, might mean?

5. How did you feel about Laura’s occasional violence toward her teachers? At what point or points throughout the book could you empathize with Laura? When did you feel the most estranged from her thoughts and behavior?

6. Julia Ward Howe had a fairly unsympathetic relationship with the blind students at Perkins, and Laura in particular, for most of the book. Do you feel, however, that over the course of the book that Julia genuinely changed and grew and became a more sympathetic character?

7. Did you find Dr. Howe to be a likable character? If not, why not? Why do think he left Laura $2,000 in his will, and left his wife nothing? Did this surprise you?

8. Although Laura could not see, she was very concerned with her own concept of “appearance.” How did Laura’s appearance impact her life? Do you think that if Laura had been allowed to get glass eyes, as Helen Keller did, that her life would have been different?

9. Laura’s religion was deeply important to her. But how did her choice of religion contribute to her fall from grace, and even from history?

10. When she’s baptized, Laura believes she can see underwater for that one miraculous moment. What do you think about the possibility of such a miracle?

11. What do you really think Dr. Howe’s feelings were about Charles Sumner and Sumner’s about him? Does Sumner ultimately emerge as a sympathetic character?

12. Sarah Wight decided to stay with Edward Bond and even bear his children after finding out that he had syphilis. Do you feel she made the right choice? Do you think she regretted it?

13. Dr. Howe refused to take money to finance a lifelong teacher and companion after Sarah Wight was dismissed. Do you believe, as Helen Keller said, that if Laura had had her own Annie Sullivan that she would have “outshone” Helen and been remembered for her accomplishments?

14. Why do you think Laura engaged in self-cutting?

15. Laura claimed that she had actually regained her sense of taste temporarily. Do you think this was true or that it was wishful thinking—or perhaps a need to please Kate?

16. In the end, it is revealed that Dr. Howe was having an affair with Kate at the same time that Laura was. Were you surprised to find out that the baby was his? How did Laura’s misconception in thinking the baby was hers illuminate her skewed understanding of how things work in the world?

17. Consider Dr. Howe’s involvement with the Secret Six in financing John Brown’s campaign, ultimately leading to the massacre at Harper’s Ferry. Do you think that Dr. Howe was right to finance Brown as an expression of his fervent abolitionism?

18. What is Visible tells of how Helen Keller was chosen from a photograph to be “the second Laura Bridgman,” and about how Helen was given glass eyes—a secret that was kept from the public during her lifetime. Has the book changed the way you view Helen Keller or Annie Sullivan?

19. How would you answer the question Laura asks Helen that begins and ends the novel: which sense would you most treasure?