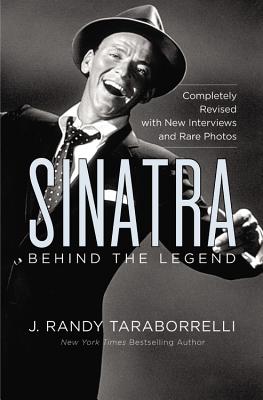 In 1997, Taraborrelli's bestselling Sinatra: Behind the Legend captivated audiences with a never-before seen look at the life of an icon through six years of research and over 425 interviews with associates, friends and lovers. Now, Taraborrelli is back with a completely new and updated lens. Fans of Sinatra--old and new--will be able to delve into the private life and controversy of a musician whose career spans decades. From show business, struggles with depression, his many romances and attaining the American dream, Sinatra's story delivers a captivating and humanizing portrait of the legend for a new age.

Taraborrelli is known for capturing and penning the untold stories of icons such as the Hiltons, Michael Jackson, Marilyn Monroe, Diana Ross and the Kennedys. He has written a page-turning biography of an extremely talented, sometimes troubled, always fascinating man: the one and only Frank Sinatra.

J. Randy Taraborrelli is a respected journalist, a recognizable entertainment personality, and in-demand guest on many television programs including Today, Good Morning America, The Early Show, Entertainment Tonight, and CNN Headline News. He is the bestselling author of thirteen books.

Praise For Sinatra: Behind the Legend…

"Even if you're not a fan of Ol' Blue Eyes, Taraborrelli's mesmerizing Sinatra is worth reading to remind yourself that, at its very best, showbiz biography can be both an art and a craft."—The Daily Mail

"In the book SINATRA: BEHIND THE LEGEND, author Randy Taraborrelli tells the history of this brilliant, controversial and enigmatic character that did everything except go unnoticed."
—Caras Mexico

Praise for The Secret Life of Marilyn Monroe:
"Readable and mesmerizing...This will probably stand as the definitive Monroe biography..."—Library Journal (starred review)

"As Taraborrelli brushes away cobwebs of myth and rumor, his remarkable research and fluid writing captures Marilyn's elan, sensitivity, desperation and despair with a haunting intimacy."—Publishers Weekly (starred review)

Praise for After Camelot:
"Meticulous multilayered details breathe life into remarkable recreations of family gatherings throughout this superb "fly on the wall" survey of the Camelot clan."—Publishers Weekly (starred review)

Praise for The Hiltons:
"Riveting...Hang out the Do Not Disturb sign for this addictive tale."
—People

"...filled with enough strange and wonderful anecdotes, and tales of love, greed, and horrid excess to fill a stack full of Jackie Collins novels."—NY Journal of Books

"A vivid account of the family's rise to fortune."—New York Daily News

"Taraborrelli has written the definitive biography of a family whose glory days may have passed but which simply refuses to recede into the background."—Kirkus
or
Not Currently Available for Direct Purchase
Copyright © 2020 American Booksellers Association