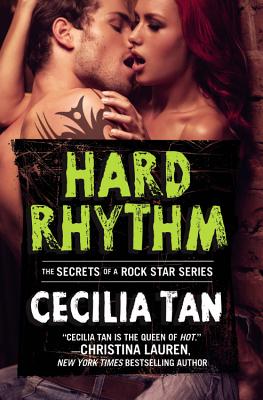 Are they ready to go all the way?

Maddie Rofel has seen it all. Even the kinkiest games she witnesses working as a hostess in L.A.'s most exclusive private sex club fail to shock her, much less turn her on. Until the night she has a very personal encounter with drummer Chino Garcia, and the two discover an intimate connection neither can deny. Suddenly the jaded hostess is softening under Chino's touch, and submitting in ways she never expected . . .

All his life, Chino has been running from something. Normally he beats back his demons by losing himself in his music. Now he's losing himself in Maddie. And, while it drives Chino wild when Maddie bares her body to him, what he really wants is for Maddie to bare her soul. For that, Chino will have to push Maddie past her furthest limits-and share his own dark secrets.

Praise For Hard Rhythm (Secrets of a Rock Star #3)…

"Everyone knows Cecilia Tan is the queen of hot, but she's also the queen of wit and angst and voice. Taking the Lead is a book that grabs you by the collar and gives you flirty-eyes. It will tell you, 'Go sit, over there in the corner chair, and don't get up until you're done.' You will do it-absolutely and happily-because Cecilia knows exactly what you want."—Christina Lauren, New York Times bestselling author of Beautiful Bastard and Sweet Filthy Boy

"Cecilia Tan's second Secrets of a Rock Star novel starts off with a bang and doesn't let up."—RT Book Reviews on Wild Licks

"Veteran Tan kicks her Secrets of a Rock Star series off with a sultry start. With a satisfying plot and an engaging cast of characters, the only thing slowing readers down will be their refractory period."—Publishers Weekly (starred review) on Taking the Lead

"Seductive fun not to be missed! Cecilia Tan will make all your sexy wishes come true!"—Lisa Renee Jones, bestselling author of If I Were You on SLOW SURRENDER

You can learn more at:
CeciliaTan.com
Twitter @ceciliatan
Facebook.com/thececiliatan
Loading...
or
Not Currently Available for Direct Purchase