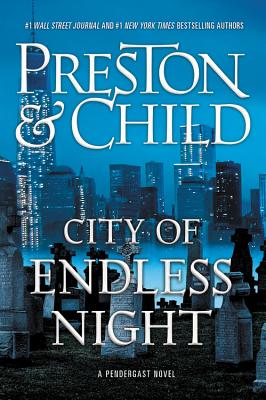 "As always, the authors have crafted a story that is almost impossible to pull away from, and their prose is as elegant as fans have come to expect. Pendergast continues to be one of thrillerdom's most exciting and intriguing series leads, and the series remains among the most reliable in the genre."—Booklist

"VERDICT: Fans of the Pendergast series will be delighted with this latest romp and its careful plotting and suspense should appeal to mystery fans generally as well."—Library Journal

"This, yet another masterpiece by Preston & Child, will be the perfect way to start out your New Year. Just as it was when D'Agosta and Pendergast first met up in the thrilling book, Relic, they are together once again solving a crime of mammoth proportions. Preston, Child, and their well-known characters are always sheer perfection!"—Amy Lignor, Suspense Magazine

"One of the best in the series--tense and tightly wound, with death relentlessly circling, stalking, lurking behind every shadow."—Kirkus Reviews

"If you'd like to know how Arthur Conan Doyle's Sherlock Holmes tales would be reviewed today, look no further than "City of Endless Night"... A typically terrific mystery laced with the gothic overtones for which this series is known...This is mystery thriller writing of the highest order, a tale as relentlessly riveting as it is sumptuously scintillating."—Providence Sunday Journal

"Preston and Child continue to write tense and compelling tales while also invoking the feel of Sherlock Holmes or other gothic stories of the late 19th century....Marvelous."—Associated Press

Douglas Preston and Lincolnd Child are the #1 bestselling coauthors of the Pendergast novels, as well as the Gideon Crew series. Preston & Child's Relic and The Cabinet of Curiosities were chosen by readers in a National Public Radio poll as being among the one hundred greatest thrillers ever written, and Relic was made into a number-one box office hit movie. Readers can sign up for The Pendergast File at www.PrestonChild.com, and follow them on Facebook.
Loading...
or
Not Currently Available for Direct Purchase