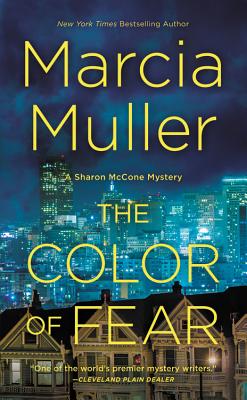 The Color of Fear (A Sharon McCone Mystery #33) (Mass Market)

The Color of Fear

When a knock on the door in the middle of the night wakes Sharon, she's wholly unprepared for the horrifying news: her father has been the victim of a vicious, racially-motivated attack.

A nationally recognized Shoshone artist, Elwood had been visiting Sharon for the holidays, browsing for gifts in San Francisco's exclusive Marina district when he was set upon by a mob of angry young men. Now he lies in a coma, hovering between life and death.

With little progress on the investigation from the overworked, short-handed police, Sharon resolves to track down Elwood's attackers herself. But when Sharon begins receiving hate-filled, racist threats from a shadowy group, it becomes clear that her pursuit of justice may be putting her own life in jeopardy...

Marcia Muller has written many novels and short stories. She has won six Anthony Awards, a Shamus Award, and is also the recipient of the Private Eye Writers of America's Lifetime Achievement Award as well as the Mystery Writers of America Grand Master Award (their highest accolade). She lives in northern California with her husband, mystery writer Bill Pronzini.

Praise For The Color of Fear (A Sharon McCone Mystery #33)…

"One of the world's premier mystery writers."—Cleveland Plain Dealer

"Her stories crackle like few others on the mystery landscape."—San Francisco Examiner & Chronicle

"If you are ever in trouble, you want [Sharon McCone] to have your back. Fans will enjoy cruising the city's streets with her once again."—Booklist

"The Night Searchers [has] the clean, classic moves of her earliest novels...[Muller] is never better than when she's roaming the streets of the city she knows and loves so well."—New York Times Book Review on The Night Searchers

"A plot so imaginative that readers will have no choice but to sit down and settle in for an exciting read they will not forget...The action never slows down, as the two investigators and their employees find themselves dead center in the middle of a truly bizarre group of folks that the reader will never forget. This is a definite keeper!"—Suspense Magazine on The Night Searchers

"Muller has displayed a knack both for keeping the series fresh and for allowing her character to grow....Muller's series remains a gold standard for female detective stories."—Kirkus Reviews, Starred Review on Locked In


"Muller has created a delicious mixture of adventure, action, altruism, pathos with a touch of humor, and romance thrown in to build a massive base of loyal fans . . . She is one of those rare series authors who never lets her characters grow stale or trite."—BookReporter.com

"Muller undoubtedly remains one of today's best mystery writers."—Associated Press
or support indie stores by buying on
(This book is on backorder)
Copyright © 2020 American Booksellers Association