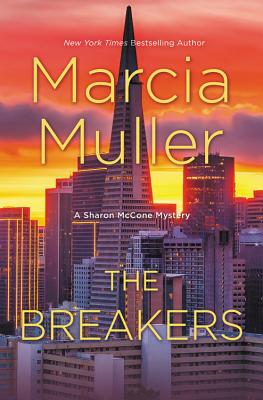 The Breakers (A Sharon McCone Mystery #34)

New York Times bestselling author Marcia Muller is at her page-turning best in The Breakers, as she digs into a particularly disturbing corner of San Francisco's history--one that Sharon McCone may not escape alive?Ä¶

Sharon gets a request from her former neighbors the Curleys. Their usually dependable daughter, Chelle, hasn't answered their calls in over a week. Would Sharon check on her?

Chelle, a house flipper, has been living at her latest rehab project: a Prohibition-era nightclub known as the Breakers, formerly a favored watering hole for San Francisco's elite, now converted into a run-down apartment building. There's something sinister about the quirky space, and Sharon quickly discovers why. Lurking in a secret room between two floors is a ghastly art gallery: photos and drawings of mass murderers, long ago and recent. Jack the Ripper. The Zodiac and Zebra killers. Charles Manson. What, an alarmed Sharon wonders, was Chelle doing in this chamber of horrors?

And as Sharon begins to suspect that the ghoulish collage may be more than just a leftover relic of the Breakers' checkered history, her search for Chelle becomes a desperate race against the clock before a killer strikes again.

Praise For The Breakers (A Sharon McCone Mystery #34)…

"One of the world's premier mystery writers."
—Cleveland Plain Dealer

"Her stories crackle like few others on the mystery landscape."
—San Francisco Examiner & Chronicle

"The Night Searchers [has] the clean, classic moves of her earliest novels...[Muller] is never better than when she's roaming the streets of the city she knows and loves so well."—New York Times Book Review on The Night Searchers

"A plot so imaginative that readers will have no choice but to sit down and settle in for an exciting read they will not forget...The action never slows down, as the two investigators and their employees find themselves dead center in the middle of a truly bizarre group of folks that the reader will never forget. This is a definite keeper!"
—Suspense Magazine on The Night Searchers

"Muller has displayed a knack both for keeping the series fresh and for allowing her character to grow..., Muller's series remains a gold standard for female detective stories."
—Kirkus Reviews, Starred Review on Locked In

"Muller has created a delicious mixture of adventure, action, altruism, pathos with a touch of humor, and romance thrown in to build a massive base of loyal fans . . . She is one of those rare series authors who never lets her characters grow stale or trite."
—BookReporter.com

Marcia Muller has written many novels and short stories. She has won six Anthony Awards, a Shamus Award, and is also the recipient of the Private Eye Writers of America's Lifetime Achievement Award as well as the Mystery Writers of America Grand Master Award (their highest accolade). She lives in northern California with her husband, mystery writer Bill Pronzini.
Loading...
or support indie stores by buying on