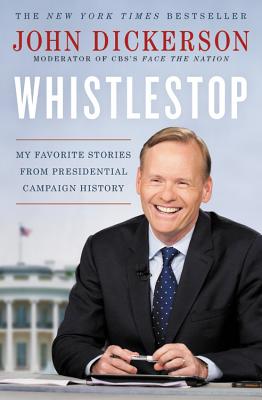 From Face the Nation moderator and contributing editor for The Atlantic John Dickerson come the stories behind the stories of the most memorable moments in American presidential campaign history.

The stakes are high. The characters full of striving and ego. Presidential campaigns are a contest for control of power in the most powerful country on earth. The battle of ideas has a clear end, with winners and losers, and along the way there are sharp turning points-primaries, debates, conventions, and scandals that squeeze candidates into emergency action, frantic grasping, and heroic gambles. As Mike Murphy the political strategist put it, "Campaigns are like war without bullets."

Whistlestop tells the human story of nervous gambits hatched in first-floor hotel rooms, failures of will before the microphone, and the cross-country crack-ups of long-planned stratagems. At the bar at the end of a campaign day, these are the stories reporters rehash for themselves and embellish for newcomers. In addition to the familiar tales, Whistlestop also remembers the forgotten stories about the bruising and reckless campaigns of the nineteenth century when the combatants believed the consequences included the fate of the republic itself. Some of the most modern-feeling elements of the American presidential campaign were born before the roads were paved and electric lights lit the convention halls-or there were convention halls at all.

Whistlestop is a ride through the American campaign history with one of its most enthusiastic conductors guiding you through the landmarks along the way.

John Dickerson is Moderator of Face the Nation, Chief Washington Correspondent for CBS News, and a contributing editor for the Atlantic. He has been a reporter in Washington for almost 20 years covering the White House, Congress, and political campaigns. Dickerson is a co-host of the Slate Political Gabfest as well as the host of Whistlestop, a podcast of campaign history.

Praise For Whistlestop: My Favorite Stories from Presidential Campaign History…

"As much as we arrogantly think our present political moment is new, it is not. Now, along comes this wonderful book to set us straight. It connects and interconnects signal campaigns from our 'glorious' past, where the same sausage making we decry today is on vivid, sometimes impressive, sometimes hilarious, display. Dickerson's artful time travel, so accessible but so eloquently written, will be red meat for anyone who counts themselves a politics carnivore-or anyone who cares about the fascinating mechanics of getting elected in the United States."—Ken Burns

"Dickerson knows what he is doing...[This book] should be kept on the night stand and dipped into when you crave a good tale. Like Dickerson as an interviewer, it has sturdy charm; it is inquisitive, generous, probing, and thoughtful. You read Whistlestop to put the chaos of today into perspective - or, perhaps, to escape from it."—NYT Book Review

"Filled with colorful characters and rollicking tales, this chronicle of exciting presidential campaigns is fun, informative, and enlightening. John Dickerson has a storyteller's touch and a historian's insight. It's nice to be reminded of the beauty and glory of American democracy at its best."—Walter Isaacson

"With a delightful conversational style featuring casual asides and plenty of incisive commentary, Dickerson's many years of experience covering politics informs his intriguing inside looks at how certain stories begin and how they grow... A politically astute, timely book that will also have great historical value for future campaigns."—Kirkus Review

"Whistlestop is entertaining and informative, but it also is a timely reminder for those tempted right now to believe that, with the growing divisions in this country, all is lost. No matter how big the storm that throws us off course, we have a history of righting the ship and steering into calmer waters."—Connie Schultz, The Washington Post

"A gifted chronicler, Dickerson looks back over two centuries of election campaigns and zeros in on flashpoint episodes that somehow reset the collective national narrative."—The National Book Review

"These stories illustrate that although this election is unusual, it's not unprecedented...Dickerson's book is an edifying reminder that human beings don't change. Politicians and voters alike often forget the past, and end up repeating the same mistakes."—The Federalist
or
Not Currently Available for Direct Purchase
Copyright © 2020 American Booksellers Association