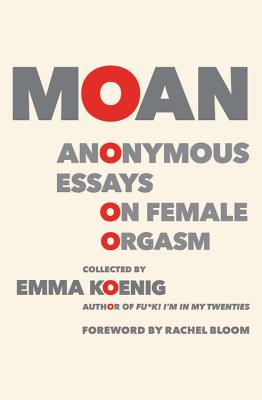 Imagine you could give an essay entitled How to Make Me Come to a past, present or future sex partner, free of judgment or repercussion. In this book inspired by Emma Koenig's wildly popular website, a diverse collective of women do just that.

Emma Koenig was inspired to answer this question after a truly frustrating sexual experience with a partner. As she says, "The simplest version of this story devoid of all identifying details: He thought I had an orgasm. I hadn't." She knew she couldn't be the only woman to have been mystified by an experience such as this, and so her Tumblr, How to Make Me Come, was born as a safe space for women to talk honestly and openly. The website touched a major chord. It received tons of press and garnered over a million page views in a month. And now, a broad range of the best of these anonymous essays have been collected into Moan.

What people are saying about it:

"Prioritizing women's pleasure is a critical part of our liberation. Not only is Moan an intimate, educational and funny collection about orgasm and desire but it pushes the cultural conversation forward." -- Rashida Jones, actress, writer, producer

"Koenig's book is exactly what we need to break the absurd, toxic silence around female sexual pleasure." -- Peggy Orenstein, bestselling author of Girls & Sex and Cinderella Ate My Daughter

Emma Koenig is the creator of Fuck! I'm in My Twenties, a handwritten/illustrated tumblr which spawned a book and a guided journal published at Chronicle Books and a TV version developed at NBC. She was a cartoonist for the Times UK and Sunday Times Magazine and has written for TV shows on ABC, Youtube Red, and Verizon go90. Her third book, Moan: Anonymous Essays on Female Orgasm will be published by Grand Central Publishing in May 2018. She is repped by Writ Large and CAA.
Loading...
or support indie stores by buying on
(This book is on backorder)